I'm a Feminist, and I play games.


When the various "controversies" started in regards to gaming, women and feminism started, I basically just read the various articles and kept my mouth shut, except on Slashdot, where I got the usual SJW/faggot/pussy epithets applied to me.   I eventually set up one of my little TV-tray style tables  (which I use while gaming for books/notes/printouts) and put a few things on there that show how I feel about these issues. 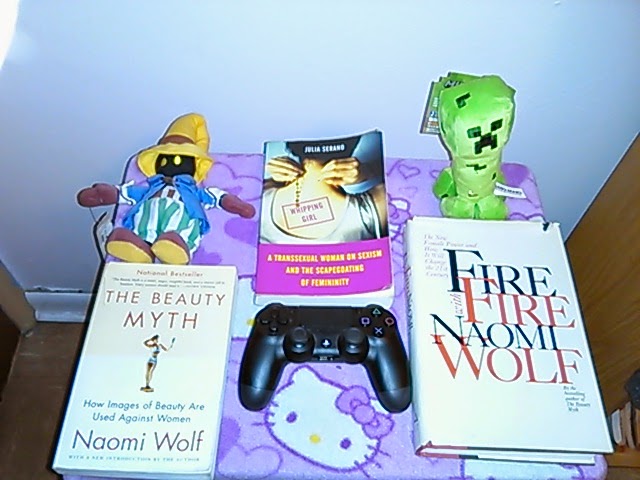 Look, there's Vivi from Final Fantasy IX, and a Creeper from Minecraft, and the Dual-Shock 4 for my PS4.  And there's a copy of "The Beauty Myth" and Fire Against Fire" by Naomi Wolf, and Julia Serano's "Whipping Girl"  All sitting on my Hello Kitty throw blankie.

So let's just say I am not overly fond of the GamerGate types. In otherwords, I'm a feminist, I game, and I have utter disdain for them.  What I think about them has been said better by others, Salome (SalStrange) in the GamerGate thread on SLU,  Jesse Singal on Reddit and The Boston Globe

Posted by CronoCloud at 12:42 PM No comments:

It had been a long meeting, the fundraising was going well, but the caterer for the end-of-fundraiser soiree had canceled on short notice. She had took it on herself to go to the caterer's office and persuade them to pay for a new one themselves.   Now she was home and looking forward to tonight as she headed for the stairs. 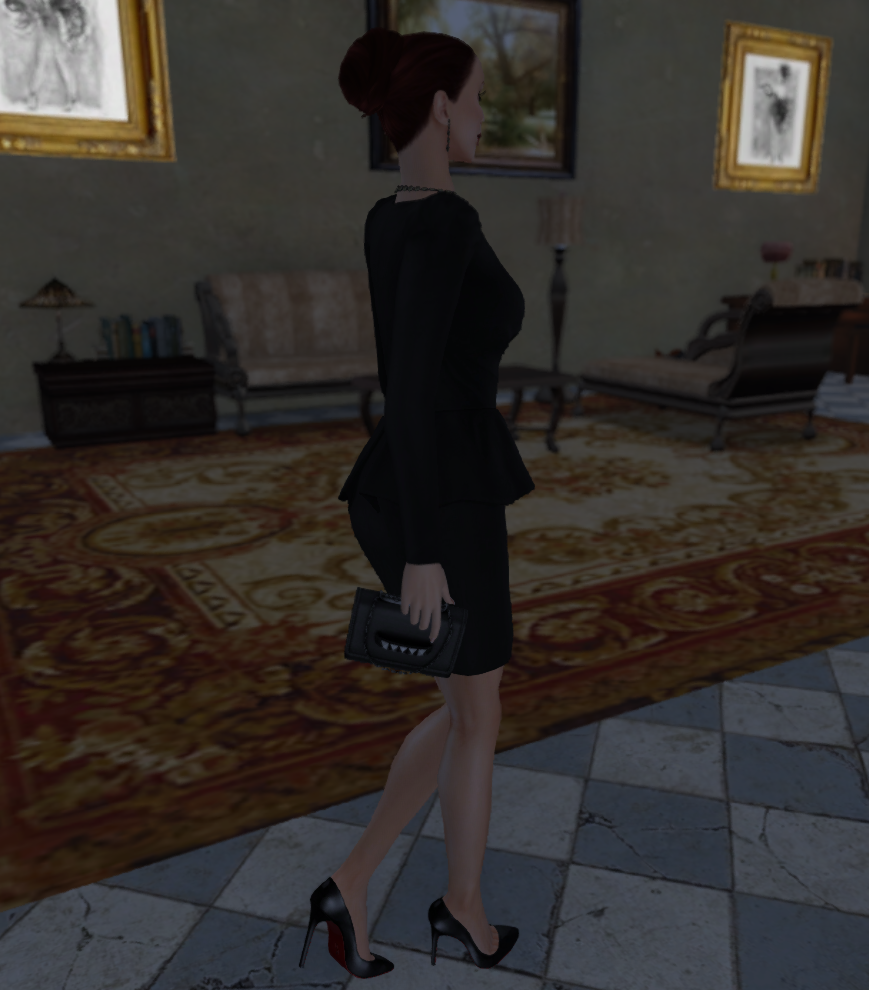 Of course, showing up in one of her "elegant socialite" black suits with a sleek and tight updo had helped with the "intensive negotiations", especially when she used that aristocratic tone she had practiced so well and used so effectively  The caterer just needed to do what she told them to do.   They, like many others, just needed to Obey.

Upstairs, she changed for the evenings fun with pride and care.  Shortly after finishing her sartorial preparations, She saw her lady at the boudoir door, pointed to the chair standing beside her, gestured with her crop and said a single word in a tone that was definitely not just a request, "Sit".

There WILL be Pleasure at Her Command tonight. 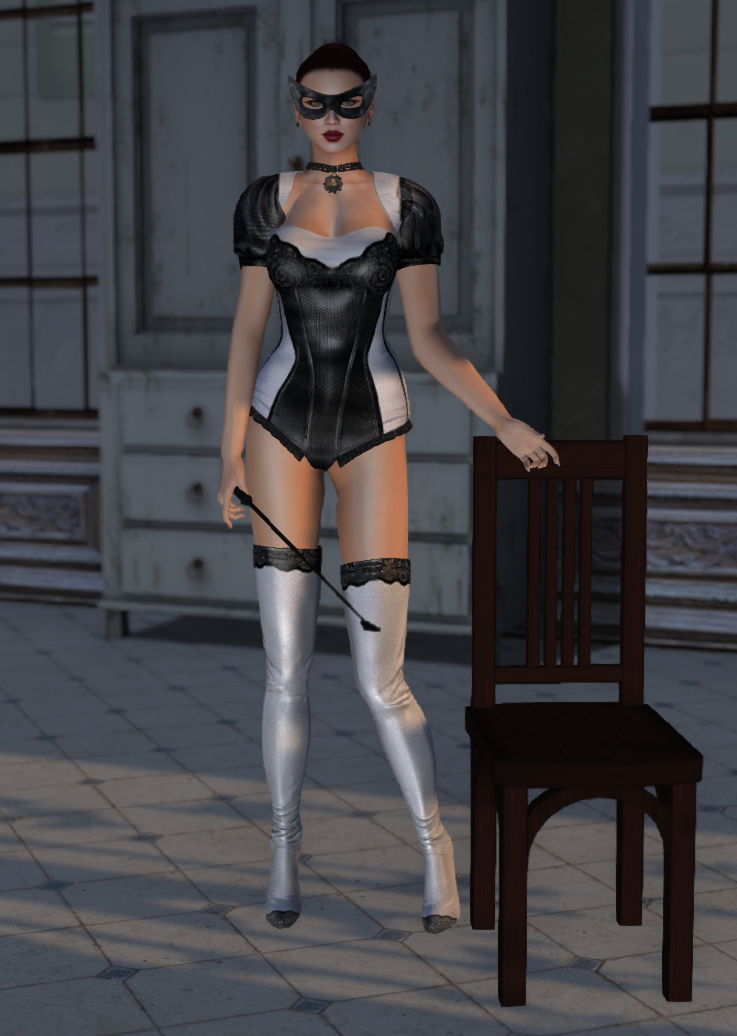 A blurb in a Fall 2012 boot guide on Harper's Bazaar says:

Thigh High needle heels conjure up a superheroine-esque power, the taller the better.


Damn right, for a thigh high boot anyway.   These are the Casa del Shai Chantel's, part of the Chantel collection featuring corset/bodysuit and masks. Pretty Domme-y gear for the Fashionista set.  The sets come in blacks/silvers/laces/greys, the fatpacks have huds to change them.  I'm showing the Black and white textures.   Harper Beresford showed them off in black.  As Harper the blogger and Harper's the magazine says, it's all about Power. 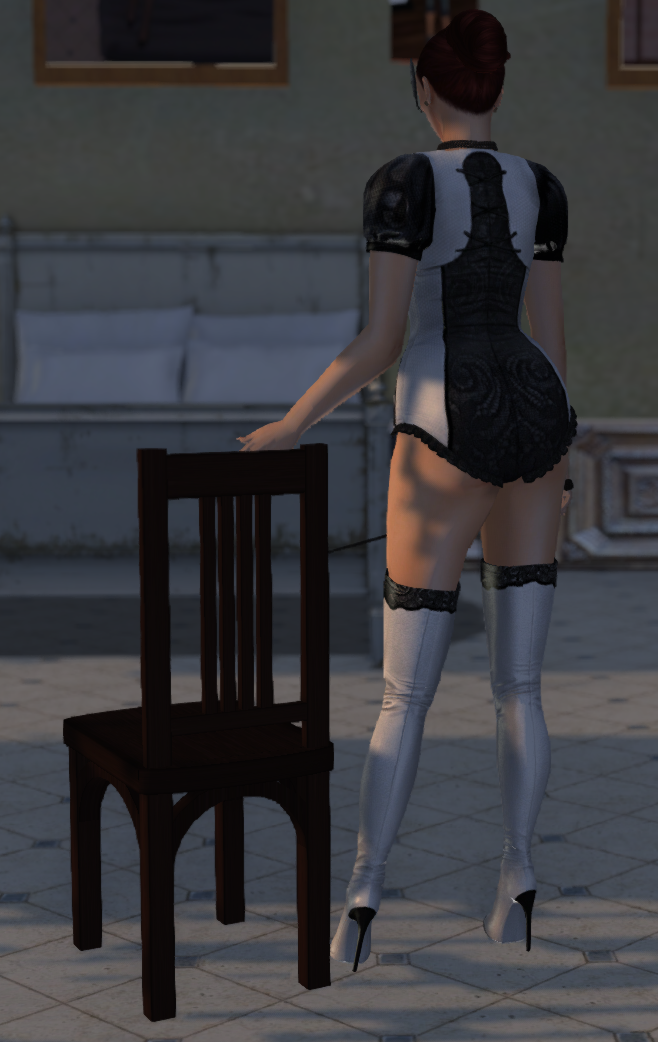 The corset fits well, the boots...I had to play with my leg muscle and drop it by "1" to get the S to fit.  I noticed a bit of skin peeking through at the top of the boot when I moved  It's not a major negative in my book, it can't really be helped and I probably should be wearing the M size anyway.   I like the texturing on the corsets, I'm not quite sure, but they may be materials enabled.  The seaming looks materials-ish in my eyes.

The tight sophisticated hair bun is from Amacci, and the Shakespeare Cameo Choker and earrings are from Caroline Apollo. 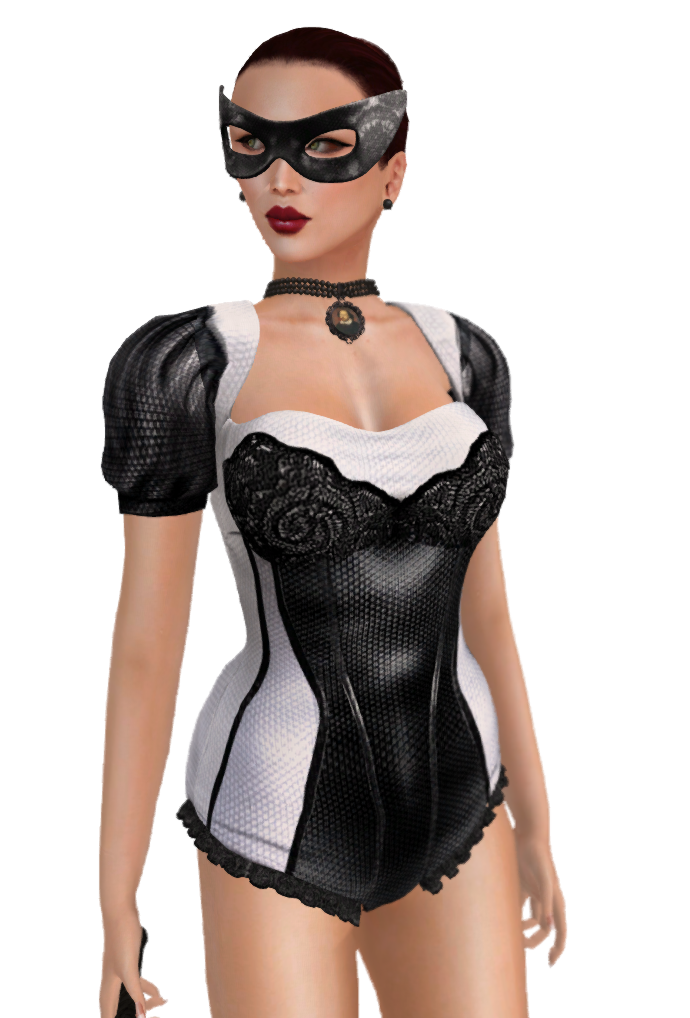 When I first saw them I wasn't sure if I wanted them or not, because I thought wouldn't get much use out of them.   I mean, I'm not a Domme, even if I sometimes joke about how I need to be "Obeyed in all things Fashion".  Then I saw this Ralph Lauren print ad in Vanity Fair''s September Style issue. This is the reason I went all "slick and tight updo" with the hair There I saw that freaking Ralph Lauren had done fetishy thigh high boots for the Equestrian Socialite set. That model there looks so damn sophisticated and aristocratic, and like she knows how to use a riding crop in both the bedroom and while on her horse.

I showed those Ralph Lauren boots to Shai, and said how the ad reminded me of her boots which I hadn't decided on yet, and she dropped the boots on me.  That's Shai Delacroix for you.  Then I just had to get the corsets and masks on my own.  I had been leaning on getting a black set anyway.

Edit: wanted to add the picture Barely took of me in the black version: 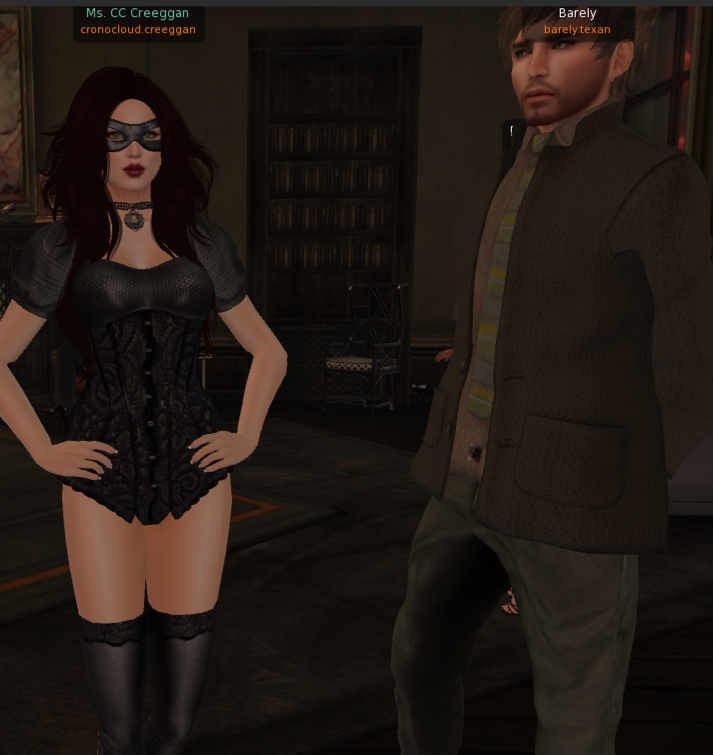 I also mentioned to Shai, that we need a mesh version of her old cow dress, so we can cow-dance in mesh.

Posted by CronoCloud at 11:01 AM No comments:

SG Bonnie mesh dress, On The Floor at DeMortesville

DeMortesville, is a kink-friendly Modern Dark Fantasy RP community founded by a friend of mine.  She had moved the community from it's previous location, to a new location some regions southeast of one of my favorite social venues that we both frequent.  I decided to take a look around again.  It's a goodly sized community build, taking up most of the region.  The Linden Railroad runs right through the middle of it, and there is a pedestrian walkway and narrow road overpasses over the LRR.

I don't do serious RP, so I'm not seriously involved with any RP communities, but I do like wandering and seeing nice builds like DeMortesville.  DeMortesville always had one of my other favorite sapphic friendly social venue builds in the Drunken Clam.  To tell the truth, I prefer the Clam build to the Duchess build appearance wise, but I think it's more of the atmosphere than anything else.  The Clam is a touch more upscale looking, while the Duchess is more blue collar.  There are other "venue" type builds set up for various RP scenarios, a sort of a rustic sailor dive, a modern style club, a "nice dressy" restaurant, a classic diner, biergarten, and a tea parlour.   I can't forget the church, and bakery either.  I had been tempted to set up residence at the old location, but as I said, I don't really do RP so it's not well suited for me.

While visiting the downstairs of the Clam I noticed changes in the stage/runway part of the build (It's much more plush looking)  and noticed the "video wall" which had screen captures from J' Lo's "on the floor" video, where she wears some sexy gold ensembles.  (The song itself is a cover of the 1989 song Lambada by Kaoma)

And I had this nice gold mesh cocktail dress from SG (Saritha Gabardini) , which I have in 5 colors.   I should get the other colors too, it's only L$70.  You can't beat prices like that.  It may be a template, I don't know for sure, but I don't care, because the texturing is very nice. As far as I know, this creator is Marketplace only. 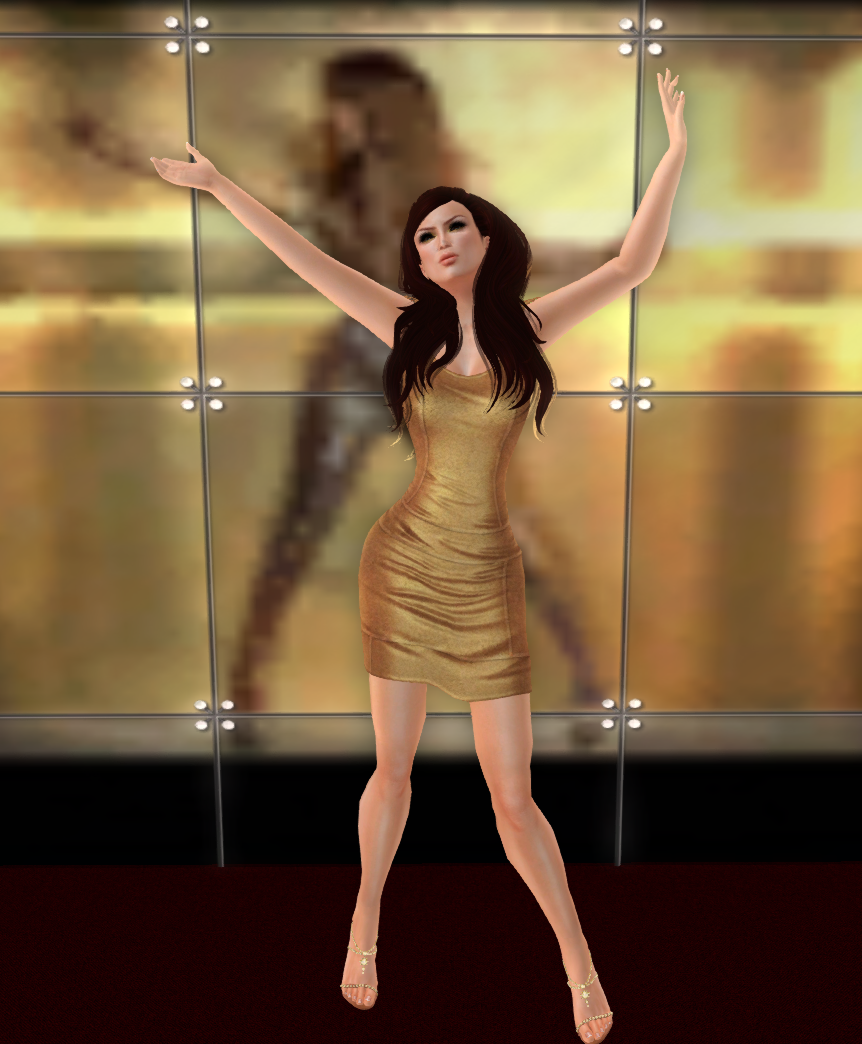 The dress has a hemline that is short, but not TOO short, lower thigh.  My favorite length for a dress like this.  As I've mentioned before, I do believe.  Shoes are the Mata Hari sandals from Sax Shepherd. You'll notice the seaming and the strappy "cap" sleeve.  Making it a sort of cross between an off the shoulder dress and a cap sleeve.  Nicely done.  This is the Truth "Grande" glamour/party hair, the version with both sides draped forward, but it still leaves plenty of foof in back. 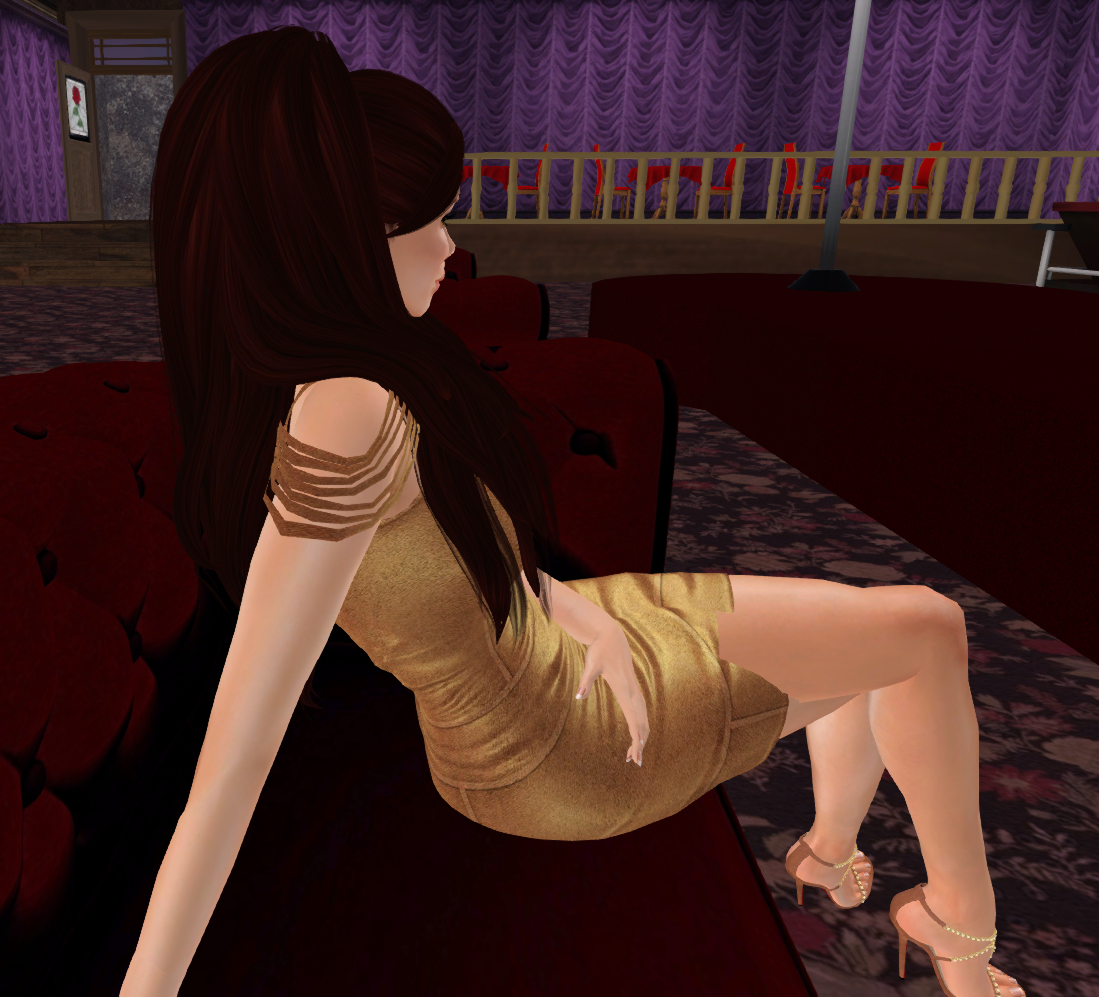 Had to take the hair off to get a good picture of the back.  Wear an updo or front-draped hair to show off the back. you can also see the sleeves better. 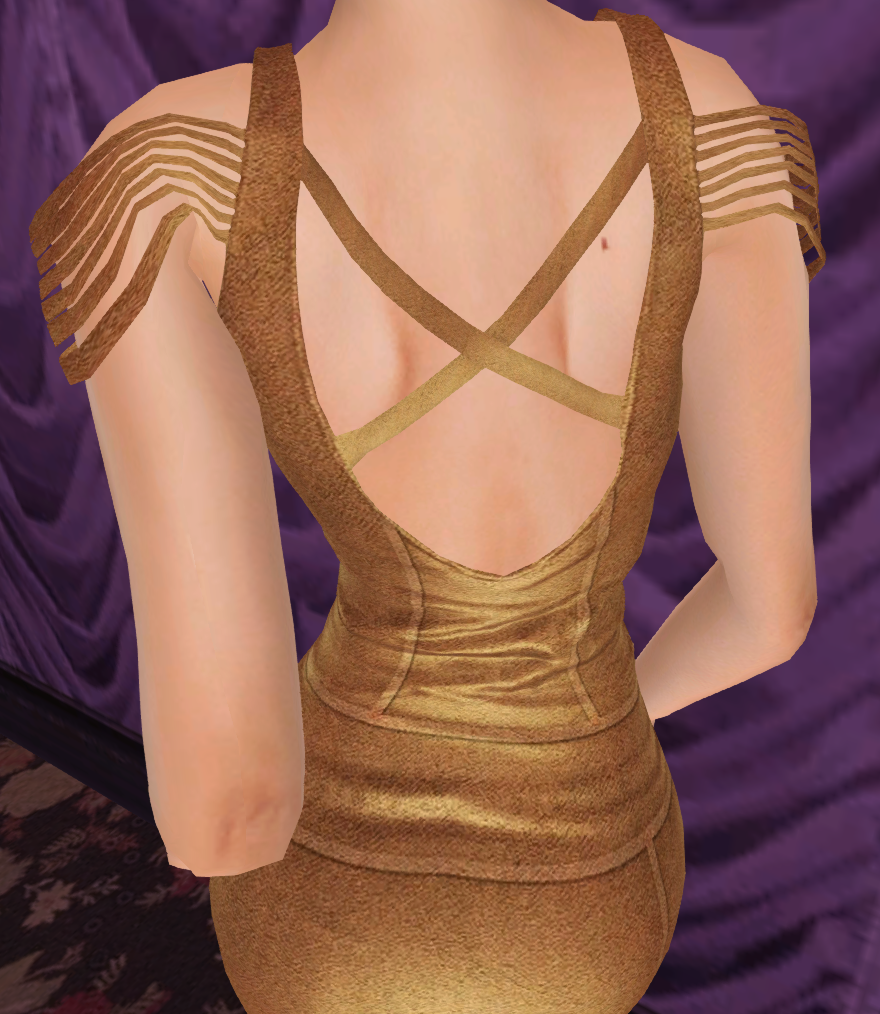 Here's the front, where you can see it's a bandage style in the shape of it.  Just simply a great dress to have. 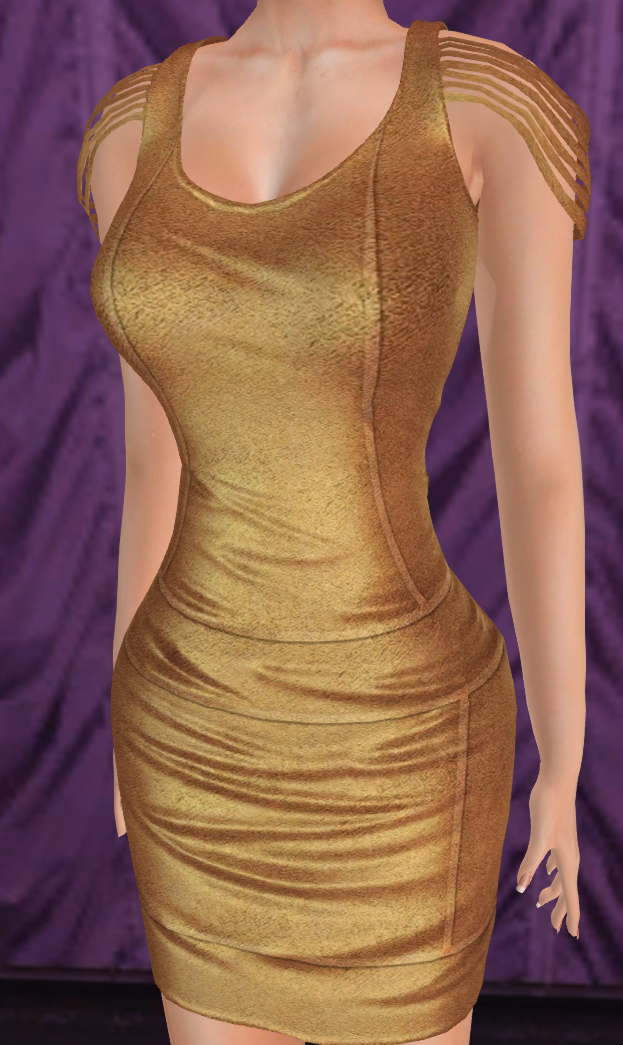 And  here it is in black, Hucci "Jacmel's" with the black.  This is Truth London hair.  It's actually more similar to the hair J' Lo has in the video.

As I said, great cocktail dress well worth the L$70.  What are you waiting for, buy!

Posted by CronoCloud at 1:17 AM No comments:

Sex and the CC, or why I visit The Chamber

Some may have noticed that my Barely Texan shots were taken at The Chamber.  The Chamber is a famous SL sex club. (Though it seems to have more slumming fashionistas than actual sex most of the time.)  I go there for the fashion, not the sex.  Really.  Sex and The CC are oxymoronic.  I fashion watch there.  Great place to play the "I have to make sure I'm very well dressed in comparison to everybody else in SL" It supplements the blogs.  Have to keep up appearance-wise with the Janes'es

But in regards to SL Sex, a friend and I were talking at my favorite non-Chamber social venue, and she assumed that I had plenty of SL relationships, basically saying "You're the CC, you're awesome/funny/kind, you've probably  had a ton of admirers/partners/girlfriends"

I had to tell her that I didn't and that I'm not that special.  Oh sure there's a few people I'm very close to, but actual SL partnering and relationships?  Just doesn't happen for me.

I can count the number of intimate experiences I've had in SL on the fingers of both hands.  I average once a year, but sex is something I don't have much interest in...in either world.  It's why I'm upfront about the tendency towards being asexual.  I can understand Sexy...but I just don't feel the "need" that others do.  Closeness and bonding, I can understand.

Posted by CronoCloud at 4:47 PM No comments:

Ran into Barely Texan again.  He had a VERY nice "I just got off work and am picking up some cannoli for dinner tonight" look going.  The tie is a bit narrow and 80's preppy, but overall I think the look works.  The texture on the trousers is very good, and I even like the shoes.  The hair is a bit whatsisname... Bradley Cooper-esque, but it's more foofy on top. 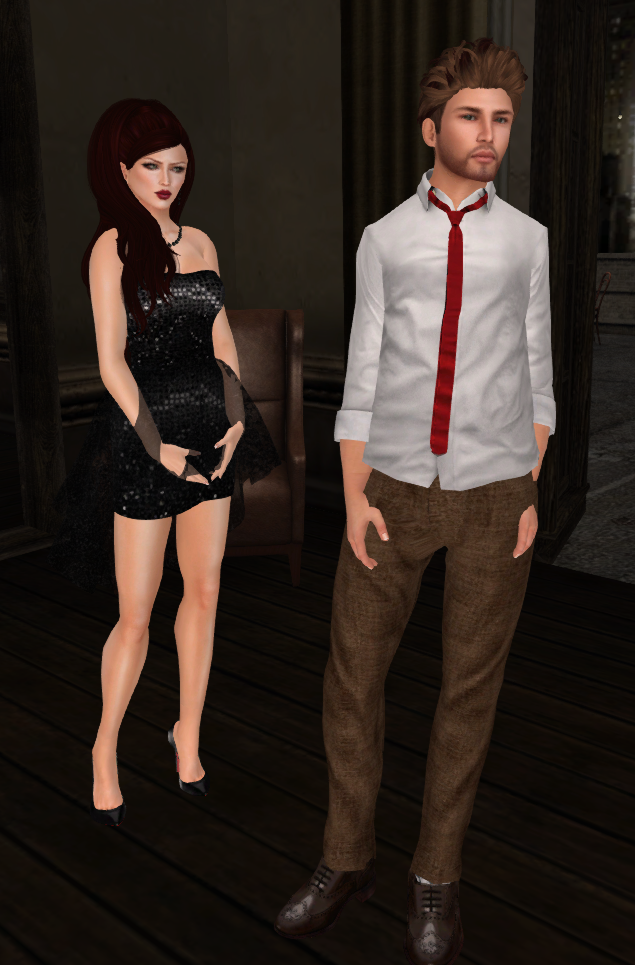 I even got him to get me a style card:


My outfit did NOT match his in dressyness level, sad to say.  This is not a "fiancee/boyfriend is bringing home cannoli" sort of dress.  It's from Wild Serenity, a short sequined cocktail/club dress with a sheer high-low overskirt.  Did you know that High-low hemlines originated in Victorian times?  They were called fishtails then. It comes in several colors.  Will I hadn't heard of the creator before I got it, it turned out to be fairly nice as cocktail dresses go.  Well worth a demo even if it's not exactly a "capsule" sort of dress.

The hair is Truth "Grande 2", the version with only one side worn forward with the bang attachment.

Shoes are Hucci "Jacmel"'s worn with the Slink High feet.