While watching the Independent State of Caledon chat I saw a notice of some new Victorian style skins. As it is now, Caledonians tend to favour certain specific skin lines, so new skins designed with Caledonians with mind got my attention:

From the release notecard.


Thank you for trying on the Callie DEMO skins from Agenda. There are six skins in this package in two skin tones. These were designed specifically with Caledon residents in mind, capturing features of both Victorian style and some features that address modern resident needs and tastes. Also included is a Body Shape and an Eyebrow shaper. These extras can be used to show what I believe is an optimal face shape for these skins, but feel free to modify them to suit your own preferences. I have also included my best pair of pale blue eyes, gratis.

At this time, Agenda Skins and Clothing is not yet open to the public. Our schedule will hopefully allow for a late October opening in the Bad Wolf Bay region. For now, you can buy these skins in Kittiwickshire at the Discovolante shops.

They're pretty skins, very classic in appearance. They only come in two skin shades, pale and medium (which I show in the closeups below) and three different makeups. The lips on the skin do not flatter either of my standard shapes lips, so if I was going to wear these I'd have to do another lip shape/lower face shape. The cleavage shading is well done, that's quite necessary for a Victorian Trollop like myself.

This is the pale skin shade: 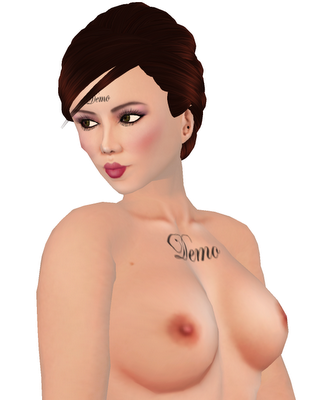 This is the medium skin shade: 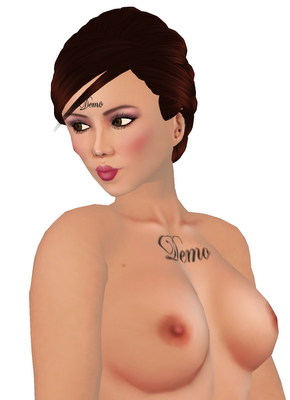 My personal opinion is that they are worth getting, if the lips flatter your lip shape, and if you like "classicly elegant" skins like I do. I only got the demos because I want to tweak my lips sometime and try them again, and I'm saving my cash for the new Fleur skins coming up next week.
Posted by CronoCloud at 11:30 PM No comments:

Twas Rosie Bartholomess that made me buy them, they were sooooo cuuuuute on her, that I NEEDED them too. 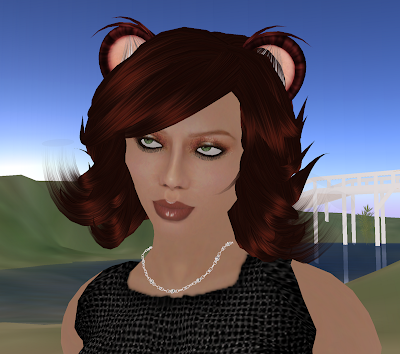 Aren't they adorable. these are the auburn ones but they come in more colors, including traditional panda style.

Slurl to Atomic Kitty
Posted by CronoCloud at 11:22 PM No comments:

A Tiny Story, you betcha.

Ya know, there was once this avatar lady in a red jacket and black skirt, her hair was half up and down and she had glasses like Tina Fey. 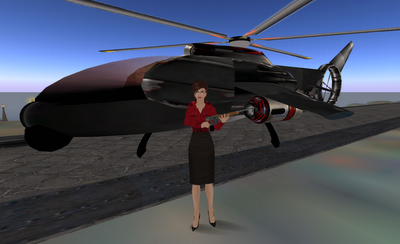 So she was wandering the skies of the grid and she found a Moose in Caledon Tanglewood. Must have been some kind of Maverick Moose to be wandering alone in Caledon. So she preparted to target and bag her a sculpty moose. 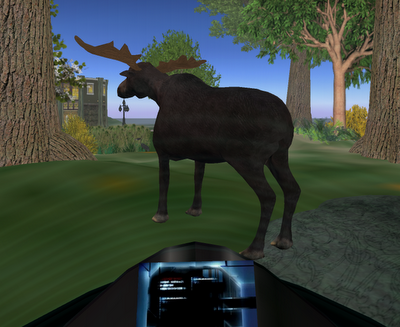 However, the Lady in the Red Jacket was called away for some other purpose. Probably involving camping for money for a bridge to a Sim named Nowhere. So she turned on the Computerized Artificial Intelligence of her helicopter, telling it to shoot the Moose and then bring it to her later, which would let her talk with the other Joe Sixpack campers about being an outsider.

So the un-womanned helicopter moved in and targeted the unaware moose with it's nose cannon.

Looks like our Moose-y friend is doomed. But wait, what's this. A Tiny defender of Moose shows up, carrying a VERY large weapon.

The tiny warrioress readies her weapon and aims at the AI controlled copter. 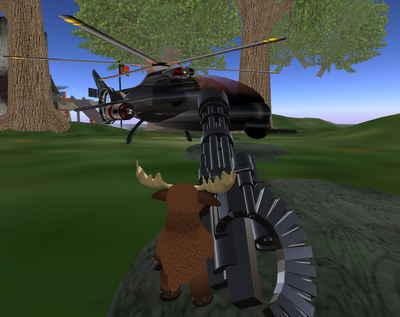 And then unleashes hell.

The helicopter is pushed away, thanks to our Tiny Heroine. Hurrah Hurrah. 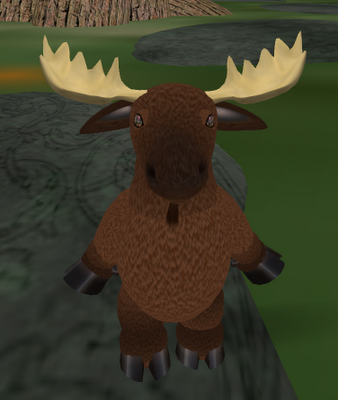 Our Heroine celebrates by giving her support to a certain Senator from Illinois. 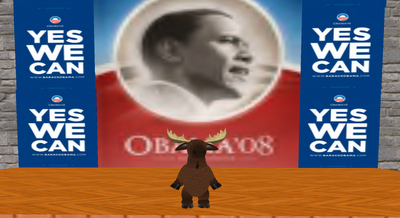