In Search of tutu.

I was hanging with Swirly Cyclone and the discussion got around to ballerinas and tutus. I thought I had seen some somewhere in my journeys and said so, and also checked my inventory. Nothing. So I decided to try the Beta of the Electric Sheep's search.


Try it yourself and see what you get for tutu

One of the results puzzled me. The one for a PixelDolls outfit at neither the Chartreuse or Port Seraphine locations. Now I'm a fan of PixelDolls so I decided to check to see if said item was at Port Seraphine but just not listed. As far as I could tell it wasn't.

the Port Seraphine store is one of those "too large for their own good stores." Meaning that it's larger than it ought to be with too much open space, which slows down the client too much. Not fun to shop in, for me. At least it's somewhat organized, though I'd put the flexi dresses on the same side of the store as the other dresses. As of now they're on opposite sides. The store could also seriously use a directory/map. Yes, I'm extremely picky about store design.

So I decided to check out the location that supposedly had the item: tropics 33, 176, 26. It turns out that sim is some kind of resort sim, and it has a mall. That location is that of a small PixelDolls store, that neither I or Swirly had ever heard about before. (It's not listed in SL search if you search for PixelDolls) Swirly also said to me that none of the PixelDolls locations had everything.

Frankly, in a direct TP enabled SL, having multiple stores is probably not as useful as it was. In fact, IMHO, designers should just stick with one. Unless, the designer uses different stores/branding for different purposes. like having a fetish line at one store and the avatar-next-door clothes at another.


Here's the "Ballerina Practice oufit L$350, it has plenty of outfit options 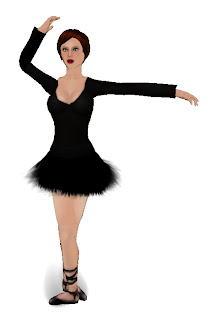 Without the sheep search I'd have not found this on my own. (though somebody on fashion emergency might have known about it. It's not on SLEX/SLB either)
Posted by CronoCloud at 10:37 AM 2 comments:

Today, or yesterday rather, the 9th was my RL 40th birthday. Yay for moi.
Posted by CronoCloud at 1:00 AM 5 comments: