The gown I wore to the handfasting: Evening Star from Adam n Eve

Here's the gown I wore to the Royal Handfasting of Gabi and Azul, Evening Star from Adam n Eve in the Genesis sim: 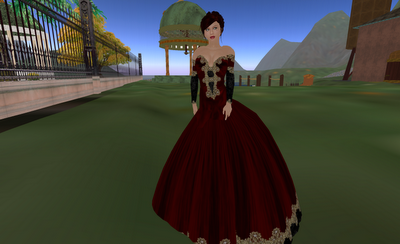 It's called a "red" but it's more of a lovely fall burgundy. I has nice contrasting black and gold trimmings on the bodice and skirt, but also comes with a plain unadorned skirt. The skirts also come in a slim version, for those who don't want to wear the poofy ball gown skirt. I just think the gown in this color is very flatting on my avatar, and it was well worth buying.

ETD Anisa hair and a Fleur skin.
Posted by CronoCloud at 9:21 PM 2 comments:

The Royal Handfasting of Gabrielle Riel and Azul Draken

I attended the handfasting of Her Grace Gabrielle Riel of Caledon Carntaigh and Lady Azul Draken. Here's one of the pictures I took. 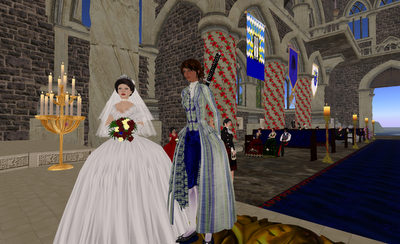 I am in the first pew on the far left in the burgundyish Evening Star gown from Adam n Eve, ETD Grand hair, and Fleur Vivant Laura skin.

I took more pictures and put them in a set on flickr:

The handfasting was probably the "grandest" event I've attended in Caledon and I am glad I was able to attend. My happyest wishes for the future to the happy couple, the Nightingale (Gabi) and the Dragon (Azul) Huzzah!

Here's some links to other Caledon blogs with posts and pictures on the handfasting:

Baron Outlander says he'll have some up
Posted by CronoCloud at 9:09 PM No comments:

Her Grace Gabrielle Riel of Caledon Carntaigh (and of Radio Riel fame too) is being handfasted on Sunday to Lady Azul Draken and I, along with many others have been invited. You know what that means, choosing a gown to wear. Her Grace is a noted Caledonian fashionista as seen in this picture with both of us wearing Simone Gatsby: 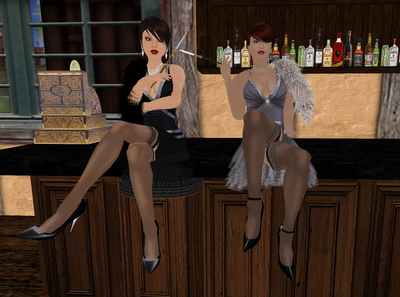 We have noted our similar tastes in wardrobe, makeup styles and hair styles so it's part of the "Caledon Mythology" that I'm a distant cousin whose clan of fashionista-warriors sold their lands and titles....to buy more shoes.

I happend to mention I was gown shopping and she showed up herself looking for another gown. Caledonian ladies, duchesses or no, can never have too many gowns. I almost didn't recognize her at first.

Where's the ETD Anisa and Tiara? Where's the ball gown? zOMG she's wearing....jean capris and....sneakers. Nooooooo. Ah I so kid the Duchess, she does look great casual too.

Goes to show you that most avatars have different looks for different occasions.

The important thing was not clashing with the Attendants which prevented me from wearing the gown I had been planning on wearing. "Cousin" Gabi's will be in red, and Lady Azul's will be in blue. So I went through my mess of an inventory. Yes.... it's really a mess. a BIG mess.

I had nothing that was really telling me that I wanted to wear it to the handfasting. I eventually picked up four gowns, only one of which I have pictures of at the moment, Carrie from Adam n Eve. It's a simple corseted ballgown with a sheer skirt overlay, I got it in black, of course. Yes, I know one is not supposed to wear black, though it's more accepted these days, but I can, because I'm a Victorian Trollop. 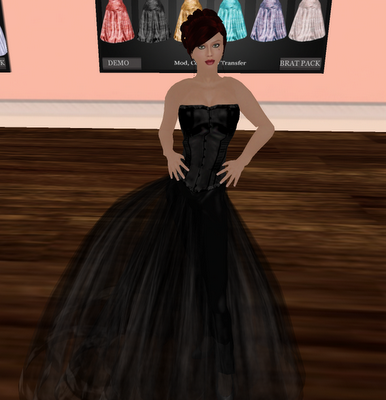 Simple! Pretty! Love! Good price too and it comes with options so you can wear the corset and stockings lingerie style.

I also Looooooove the newest Adam n Eve build in Genesis sim. It is VERY well designed, signs, teleports, it rezzes quickly, it's not laggy, and it's attractive.

Now I may not actually wear that gown to the handfasting, I may choose one of the others (though one I will probably save for the Bardhaven Halloween Ball), or just go in Uniform of one of the Caledon Military groups. ( I can do that too.) I did need to supplement my collection, though I have gowns that are more "Old Hollywood" in style. I don't have many that said, "Caledon handfasting and reception ball"
Posted by CronoCloud at 10:39 PM No comments:

Yes, I'm still alive and in SL. It' really is hard to get back in the swing of things, I swear. I login with the intent of doing bloggy stuff but then I get distracted, and NOT with shopping.

I have put a few newer pictures on my flickr that I've finally gone pro on. Alaska Metropolitan told me I would go pro eventually. :-) You can see that I "finally" got the ICING Miss Hathaway gown that everyone else has.

Also, one of my friends in SL has left SL, fellow blogger and redheaded hussy, Kit Meredith. I respect her reasons but I'm going to miss her very much. Which, with the ending of Linden Lifestyles, means I am the ranking redheaded shameless hussy on the grid. And these days now that I think of it, I am one of the "older" fashionistas on the grid, which is really strange.

I really should work harder on doing stuff for Metro Models, writing fashion show scripts (blurbs for outfits) is fun most of the time, unless I'm having writer's block. And on the new machine I could turn down the settings and sit for hours at a fashion show.

I've finally figured out how to solve the 11MB high res SL .bmp dump issue, just go ahead and let SL compress them, it'll save em as .png which is not lossy and a lot smaller.

I've also been flirting with Miss Hypatia Callisto of Caledon, every chance I get, simply because she says she doesn't get flirted with. There may be a Caledon singles ball scheduled sometime so that we singletons can celebrate our singleness and be cheered on by all and sundry.

I also need to take a picture of the bear ears of immeasurable cuteness. Nothing is cuter than me in bear ears, except Rosie Bartholomess in bear ears.
Posted by CronoCloud at 12:41 AM 3 comments: