BlakOpal isn't a new store to me, I don't recall ever mentioning them on the blog before. They desbribe themselves best: Victorian, Gothic, Steampunk, and Pirate-wear for Men and women. This is a new Gothy release, Bella Luna 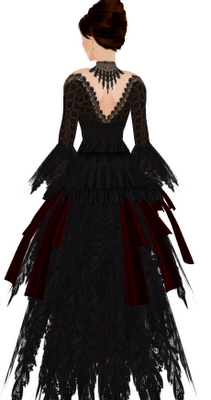 Moves well too. That's what of my things I look out for, does it look pretty when I'm moving. I'm all about the pretty. 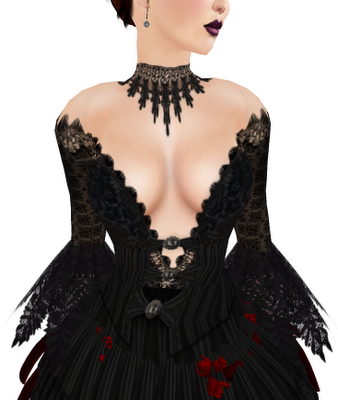 That is very nice work on the bodice, well done indeed. 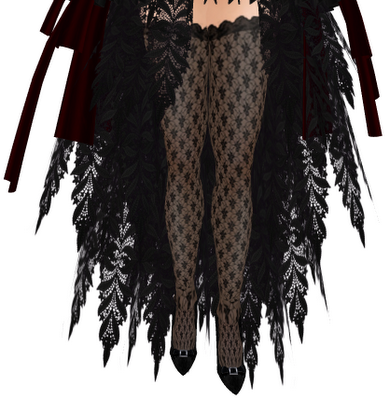 The stockings, while very squeetastic, are let down by the SL ankles, darn it. I do so love a good patterned stocking (in RL as well). 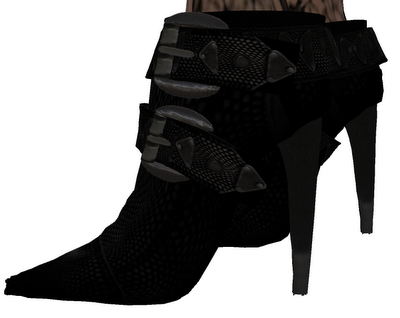 Those are the Riveted Low ankle boots, a little Western to my taste but not bad at all. Though IMHO it's the pirate-y knee boots to really take the cake in the footwear section at BlakOpal. Mmmm Pirates. In fact, the first time I saw a lady dressed in BlakOpal Pirate gear I immediately thought: "Pretty! CC Want!" And I still haven't got around to it...skin comes first.

The gown was dropped on me by the owner, but I have other blakopal items in my inventory. The skin is a 5th and Oxford Brooke Nightfall. The hair is new, a very "Joan from Mad Men"-ish updo named "Mrs. Kitten 2"from Clawtooth at Tableau

SLURL to 5th and Oxford at Nouveau

SLURL to Clawtooth in Tableau
Posted by CronoCloud at 7:47 PM 1 comment:

My Name is CC and I'm a Girloholic. (with props to Salome) 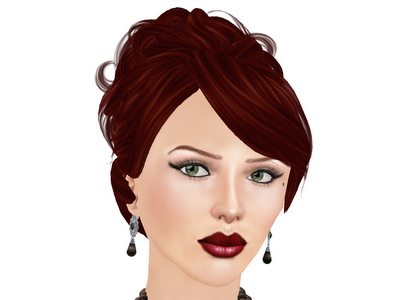 My former Boss at Linden Lifestyles, Salome strangelove has written a very thoughtful post in regards to her feminism and her "Squee" over SL fashion.

I could tell epic stories about my angst in trying to reconcile my feminism, with my love of femme-y things, and my Transgenderedness. And I do mean epic. I have several threads, one of them 18 pages, on a message board I frequent that are basically all about that issue.

Dear readers, did I ever tell you that I'm amazingly low self esteemy? Even in SL! Just last week I was thinking that perhaps my avatar wasn't pretty enough.

What helped me the most was my friends on the Internets, and the Visible: A Femmethology Volumes.

Am I a feminist? Yes, yes I am. I've identified as such for years. Lets see, I think it was before Anita Hill, somewhere between 1988 and 1990. I began identifying more strongly with feminism with the rise of Third Wave feminism. In fact, it was a series of articles and interviews in Glamour magazine about and by Naomi Wolf and Susan Faludi that did so.

I would describe myself as a pro-porn, pro-choice Third Wave feminist. I'm a practical feminist, I don't go for that deconstruction and theorizing, it hurts my head. I like to keep it simple.

I don't refer to myself as a "girl" or "woman" yet, I feel like I haven't "earned it" yet, but when I was young, I played with my sisters dolls, read her YM and Seventeen, played with her makeup. But that doesn't mean I didn't like Dungeons & Dragon's (got my first set in 81), playing with the Brix Blox Lego knockoffs, and playing video games.

I also sometimes sing the chorus of "I Enjoy Being a Girl" from the Musical "Flower Drum Song", sometimes ironically, but sometimes not, and I have done it while shopping in SL:


When I have a brand new hairdo
With my eyelashes all in curl,
I float as the clouds on air do,
I enjoy being a girl!