Truth, Monso, and why my last few blog posts have BAD pictures.

You know I read Gogo's blog, Juicybomb.  Everyone does.  So I saw the Monso jeans she showed off and went to check them out at FaMeshed... at the same time I saw the new Truth corset sets and picked a few of those up... I then thought that they would look good together and took pictures...on May 3rd.  So I check Juicybomb today and see this post showing off the Truth Corsets with Monso jeans.  Decided to go ahead and post mine too...and to make a bit of a point at the end of this post.

Lutefisk is wearing the Antique color corset with the dark blue jeans against a pale background:

Let's get this straight, these corsets are not perfect, the flared peplum on the corset sits closer to the body than it probably should so if you have a bit of a butt, whatever you're wearing on that butt might show through, depending on item and shape.  If I sized up the corset there was a notable gap between the corset and my virtual boobehs... I had to size down the jeans so it wouldn't show..but then my skin in front pokes through the jeans, but the peplum covered it.  Simply put, I really couldn't "effectively" wear these together with my shape though they're fine separately.  So watch the peplum!

The jeans are fantastic, love em. have been mixing and matching with them.  bought 3 pairs, will probably get the others.

Regular but still gaussed and glowed me is wearing the black corset and jeans...against a dark background:

And finally, my recent blog picutures involving Lutefisk have been BAD pictures from a shoppers perspective...do you know why?  Excessive use of glow and blur and lack of contrast!  These pictures have been intentionally done glamour blog style to make a point.... you can't see detail to judge items on their merits if everyone is going around glowing and gaussing up the wazoo and taking pictures against backgrounds in the same color family as the outfits, as I've discused before.

So yes, while I think the glamour blogs have pretty pictures... they're doing a disservice to shoppers with the excessive photoshop.

Posted by CronoCloud at 12:10 PM No comments:

Jackal Ennui of Lassitude & Ennui has been making items in SL longer than I've been an SL resident.  She was known for her jewellery and footwear,, but has branced out recently into mesh items..  Specifically a gothy dress (that doesn't work well with my shape) and this dress... the Naiad.  Yes, you have to put up with glowy and gaussed Lutefisk me for these.  I'm also wearing Jackal's new Knotted pearl necklace...which I fatpacked...sadly it does not come with earrings.  Remind me to beg jackal to do matching earrings.

I tried on the demo....bought the fatpack which is cheap, if you're going to get 3 of them just get the fatpack... it's that good.  A very pretty spring halter dress that comes in the usual springy haltery dress colors: Cream, Ink, Rose, Peach, Silver and Teal  This is the perfect dress for a dressy summer date, or as a guest for a daytime summer wedding or garden party.  The details and texturing is VERY good, which is to be expected..it's Jackal Ennui after all.  I'm wearing the cream with the G Field Alex shoes.

A closeup where you can see some of the necklace and of course glowy blonde me.  That's Truth Mayim hair which is a little shout out to Boss Lady Salome because of whom I found out about this dress.  Mayim is one of her favorite Truth styles,  though she would NEVER wear it in Swedish.  This is the usual Shyla Pale skin with IKON Lucid eyes in Floe. 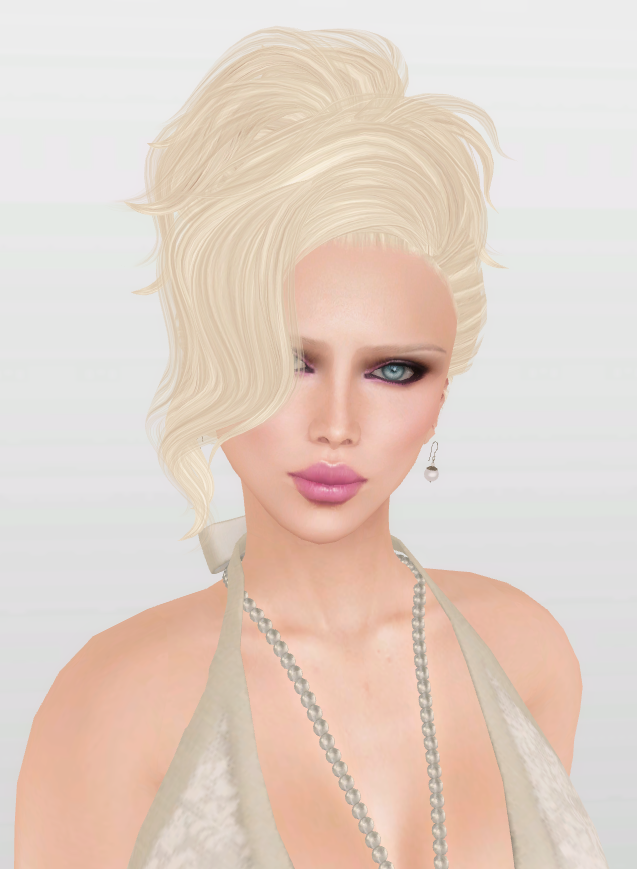 If you still have an L&E LM, it's still good, Jackal h asn't moved.

I love the sheath dress, I worship at it's altar.  I like it jewel necked, v-necked, ballet necked, scoop necked.  I like it sleeveless, long sleeved, 3/4 sleeved.  I love it in RL, one of my favorite dresses of all time was a square-necked sheath. It's stylish, it's classic, you can take it from day to dinner with accessories.   Have an unexpected event to attend, pull out a sheath.  Wear a jacket over it for an interview, wear it on a date, wear it to church.  Wear it everywhere.  I love it in RL and I love it in SL, ever so much.

A few days ago I got a surprise gift of the Sloane dress from Ava Rage from a store I had not heard of, called Style Edit.  She said she thought I would like it and said to let her know if I wanted it in black instead. 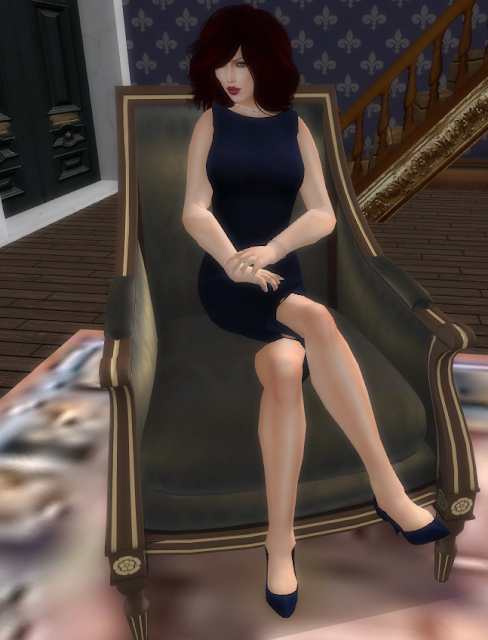 You can guess what happened...I went and bought two other colors, including the black, right quick.  I was all over that like a sheath loving fashionista over a nice sheath.

What we have here is a simple sleeveless sheath, with a hemline a couple of inches above the knee (which is my favorite hemline both in SL and RL)  It looks attractive, it has nice texturing and detailing and fits fairly well.  You can even see zipper detail in the back, which I forgot to show.  I also have to note that it does come with options for those who wear....shudder....mesh boobs.  It comes in six colors but I only have 3 of them so far.  It is inexpensively priced at 175L$, what a deal.

I may not have heard of Style Edit, but it turns out I did know of the owner, Editrix who is known to me from Fashion Emergency.  While the avatar is relatively new she admits to being an oldbie...predating glitch pants she says.

I also have to show off this hair I picked up at the Truth sale, Teddy.  Yes, I know you can't see it well against the dark background with blur and glow...but it reminds me of an old ETD favorite "go to" hair: Maaliyah, which Elika has not done a version of for Elikatira, sad to say.  So yeah this Truth hair reminds me of it.  Also Truth has extended his sale to the 10th of May...YAY.  That will make those who've had a hard time getting in, happy.

I'm also wearing the Earthstones tennis set in diamonds and platinum and the IKON Lucid eyes in Moor. 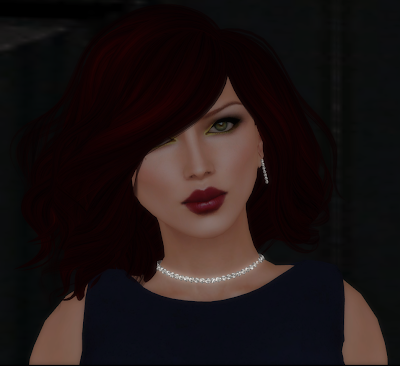 I decided to bring out blonde "Lutefisk" to show off the pink leopard version of the sheath.  Same Truth Teddy hair but in Swedish.

You know the worst problem I had with this dress?  Shoes.  I had to use my Baby Monkey kitten heel fatpack because the colors were closest to the navy and pink.  And people say "I don't need the fatpack."  I always need the fatpack.. I don't always have the fatpack...but I NEED the fatpack...especially in shoes.  I can make do without Willow Packs in hair, but I need fatpacks in shoooooes.  (Ach, there's my oldbie-ness showing again...Willow Packs are what we used to call fatpacks...named for mega-shopper and blogger Willow Zander) 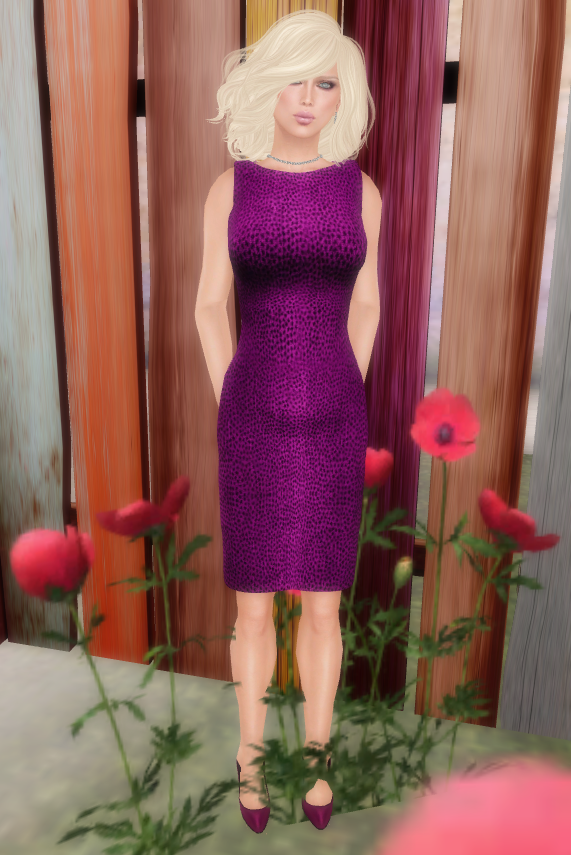 Gotta have a close up of Lutefisk..some people prefer blondes.  I think I look a touch younger in the Belleza Shyla skin, compared to the Belleza Betty....I can't wear Shyla with my red hair because I don't have a properly dark red brow tattoo.  The Shyla's red brow is too light and and the Betty brow tattoo doesn't work with the Shyla.  Yes, I've made a customer service request, and offered to pay for one.  I got a pleasant response from the CSR...but no brow tattoo yet...sigh.  I wouldn't have bought the Shyla if I had known the red brow was too light, but there was no red brow in the demo!  I'm so disappointed, because I like the Shyla but can't wear it with my proper hair.   Also some of the other Belleza skin packs don't come with a red brow option...at all.  Which disappoints me. 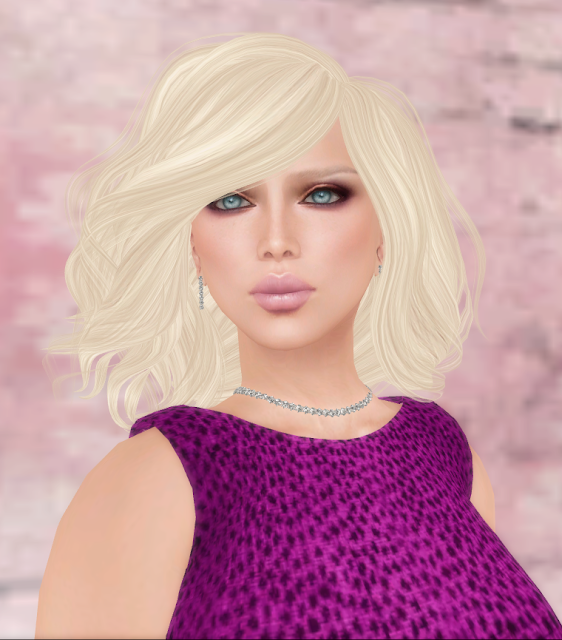 Those are IKON Lucid eyes in Floe.

Why Do I Blog meme, with a nod to Strawberry Singh