While there is some dreck promoted through the Fashion Consolidated group, sometimes FashCon comes through with something you were thinking about or looking for.

A few weeks ago, just before I posted about my openness to an SL relationship, I was wondering what couples animations were out there intended specifically for femme couples, ie couples comprising two female avatars. So I did a little bit of looking, but didn't find much, though if memory serves me correctly Luth Brodie has some at Reel Expression. UPDATE: Luth has 9, and is working on more, they are availabe at Reel Expressions in Lalique Square.

So, a notice earlier on Sunday from Aphrodite Creations caught my eye, and i took the notecard. When I opened it and looked at the pictures of the animations, I thought: Bingo! I was busy at the moment but a short time later I TP'd over to the Aphrodite Creations store and bought the three femme couples poses for 100L$ each. Soon after, I got an IM from Aphrodite Outlander saying, "How dare I shop in her store when she wasn't there." :-) Turns out she's a big fan of Linden Lifestyles I told her the above story and told her I was pleased to see and buy the poses. I didn't take the time to fully explore her store, being L$ broke after buying the poses, but she does have some nice shoes and dresses. Later on I wanted to take some pictures of the poses, but since I am without an SL girlfriend I was trying to decide who among my friends list to ask to help. Then I thought about asking Aphrodite herself, who ws nice enough to take the time to help me out.

Pose 1: in this one it looks like I am being shy while being pulled over for a smooch. 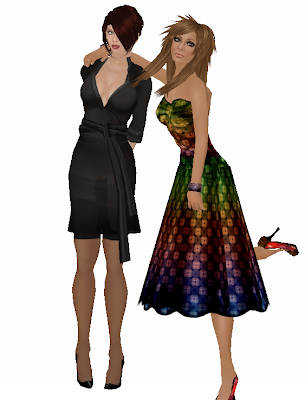 Pose 2: Back to back with our heads slightly touching, very pretty. 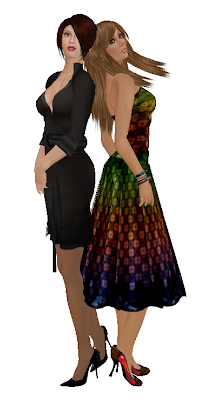 Pose 3: Looks like I'm about to lead her to the dance floor for a twirl. 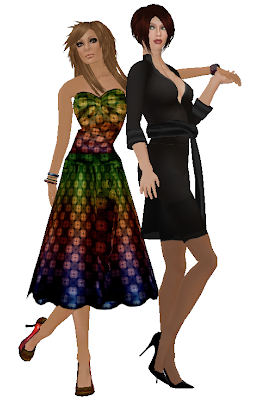 I liked the poses, and I hope Aphrodite does more. Also the individual poses in the pose hearts are copy so you can use them individually in your pose stand. Very cool. Thank you again, Aphrodite for taking the time to pose with me.

Cheating on Fleur with Rosemary Galbraith.

I wear Fleur skins pretty much exclusively, everyone knows this. Last night Rosemary Galbraith of OH! What a neat boutique asked for my input on some skins she had made. One of them was this skin:

Uh huh, it's pretty. She customized it according to my input, with slightly different torso and belly button. And red brows of course. I like, oh okay, I LOOOOVE. Pretty! I might actually wear these along side my Fleur's. They're a touch more "traditional SL skin" than the Fleurs, but more classic than say Minnu's. 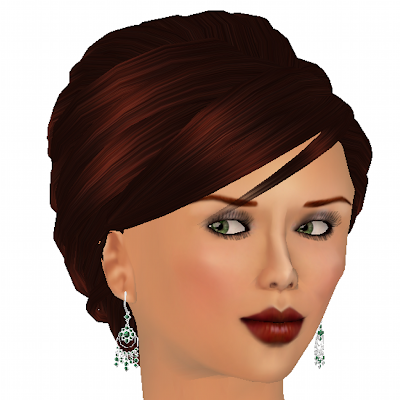 And now I feel guilty for skin-cheating on Roslin and CJ. waaaaaah.
Posted by CronoCloud at 4:08 PM 1 comment:

There will be no posts from me for the next couple of days (until the 19th) because of the blogger strike started by Gwyneth Llewelyn. Of course, since I don't post a lot that's easier for me than others, but I thought I should at least say something.

The issue is real to me When I started this blog, Linden Labs guidelines for bloggers were pretty liberal. Essentially, "Hey take these images here and use them as appropriate, and put a disclaimer on your site and it's all good."

So I folled the guidelines, and now I have an SL blog with SL in the URL that I've been wondering what the heck I'm supposed to do with. Should I just change the URL? How should I refer to SL and LL in my blog? LL's new rules aren't entirely clear and they are also far reaching in ways I think they shouldn't be. That's why I'm joining the strike along with other SL bloggers.
Posted by CronoCloud at 10:59 PM No comments:

Peeking out of my shell.

I've decided to become more comfortable with certain things, and to try to experiment and be more open to new things in regarding SL relationships and love. To let myself be more outgoing, and less shy, and that it's okay if I flirt or do other things in SL, or to, as the vernacualar puts it, be shmexy avatar: 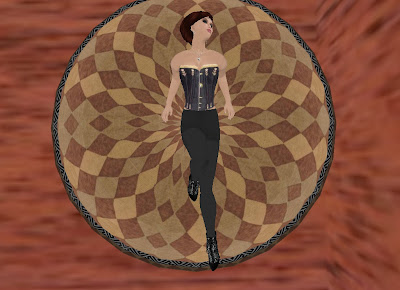 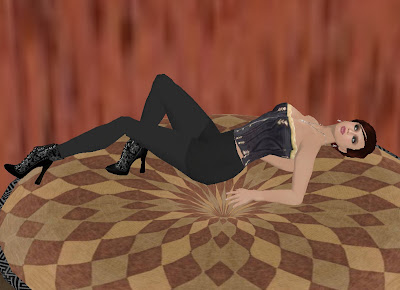 This doesn't mean I'm going to be stripping at the current equivalent to the old "Barbie Club" though. :-) What inspired the "New Improved Somewhat Shmexy, But Still Classy CC"? Windlight in part, it sure does make me pretty, and reading the thoughts of Kit Meredith on Love and Relationships in SL. And talking to people, and having someone flirt with me, with me of all people! I want to thank those who talked to me and listened to me, and inspired me, I really can't thank you enough.
Posted by CronoCloud at 2:59 AM 3 comments:

Nan Bamaisin is the owner of the Modest Mommy SL fashion blog. she focuses on more modest clothing, and is a "girl with glasses". I really like her blog, because she's a fine and humourous writer. Saw her today and helped her a bit with some info on lighting settings. Got a pretty nice picture of her Modest Cuteness too: 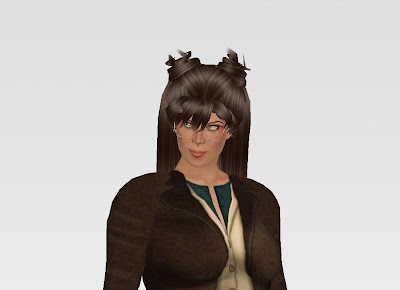 I love chatting with other fashionistas
Posted by CronoCloud at 2:48 PM No comments:

There's a lot of notices in the FashCon group, but some catch ones notice. There was a notice about an eyewear store I hadn't heard of called Mokoptical In the notice there was a picture of some awesome women's glasses called "Mary". But perhaps "Sexay Librarian Mary" would be more appropriate. 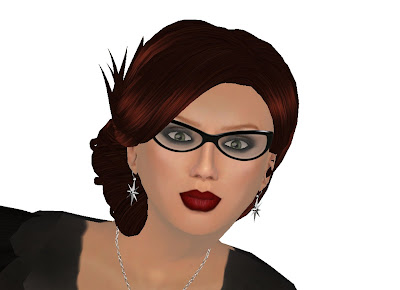