I was in a group chat and someone mentioned an internet meme showing Carl Sagan and Snooki (yes that snooki from Jersey Shore), where if you didn't know who Carl is, you are what's wrong with the world.

So I got the harebrained idea to Snooki-ize myself a bit:

That's a Vero Modero Dream dress. They have a ton of cute n' sexay dresses like this...in their casuals section...it's quality stuffs in my opinion.

Hair is Truth Bonnie, for that poofed up big hair snooki- look. 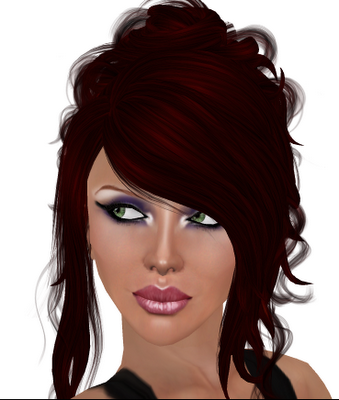 The skin is a 5th & Oxford Tan Rebel Rebel 1 with M.O.C.K Cosmetics L'Eau lip gloss Alchemist and Mile High Eyeliner layered over it.
Posted by CronoCloud at 11:23 AM 1 comment:

I have an alt

I finally created my first alt, to test out Firestorm and for utility/group purposes if ever necessary. And of course one of the first things I did was make her look properly like me: 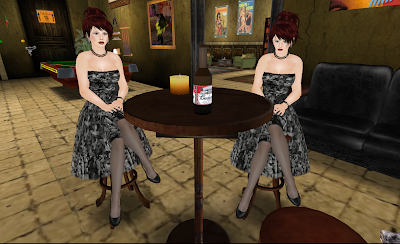 From top to bottom:

And of course, my own shapes.

The one thing I really miss are my Miriel Enfield Eyes...sigh...I know they're old and that there are plenty of good eyes on the grid, it's just don't look like me without them.

I freely acknowledge my alt's name, since she's just for utility purposes: CeciliaCreeggan. Makes it easier for folks to realize it's me if I'm puttering in it. Don't intend to shop for it....I just needed a pretty outfit for it because no ALT of mine is NOT going to look properly like me and duck waddle.
Posted by CronoCloud at 10:41 AM No comments:

The Viewer Drama, or why CC recommends Snowstorm.

I use Viewer 3, there, I said it. Specifically the Snowstorm releases Wouldn't use anything else as my primary viewer. Readers are probably thinking...."But CC, you're a 64-bit Linux using nerd, I expected you to use Imprudence!". I don't. There's reasons for that, I NEED the outfits feature and multiple items on one point...Imprudence doesn't do that, and Firestorm doesn't have the "outfits" feature.

Personally I think viewer 2/3 gets "some" unfair vitriol aimed at it, for several reasons. And you'll notice I said "some"

1. Viewer 2 was developed mostly in secret, while viewer 1.xx languished. Because 1.xx wasn't getting new features, some power-users jumped to third party viewers. That was a bad thing, because it fragmented the SL userbase. It also meant that:

2. Viewer 2's UI was obviously developed to resemble other "normal" applications. It resembles web browsers the most, specifically it resembles Firefox on Linux, at least to me it does. Thusly it was intended to ease newbies into SL. However to oldbies familiar with the old "strange" UI, it was totally different and worked in unexpected ways.

3. If LL had gradually introduced the UI changes over time into the 1.xx viewer branch there might not have been as much resistance....but they had to dump that old creaky codebase so it was a big jump or nothing.

4. LL also overestimated the users wilingness to experiment and play with UI. They also reduced the viewers "discoverability"...some users take a while to realize that those "plus sign" and "gear" things in the inventory window are UI! Using those (and putting them at the bottoms) was a bad design decision I think. But let me tell you something that's been publicized in the geek press: Most of the requests for features for Microsoft Word are for features that are already in it. Most people aren't nerds and don't "play" with UI, so if they don't see a feature right off, it might as well be absent to them..and they often think that the feature isn't there. That applies especially to Viewer 2! And because they UI is so different, people often assume "everything" is different, and don't even try to explore/play with the UI.

I had a conversation recently:

Them: "How do you take screenshots in Viewer 2"

Them: "Where is it in the menus"

Me: "You don't need the menus, the shorcuts are the same, Shift+Ctrl+S and Ctrl+~"

The next thought on my mind was, if you use the shortcuts then what's the problem, it works the exact same way! I suspect that they told a fib and don't use the shortcuts and use the screenshot widget and didn't want to admit it. By the way, it's in "World>Snapshot"

"the same way you do in viewer 1? Right click and pay?"

"Oh, it's so different I figured they changed it."

I freely admit that early viewer 2 was a mess that wasn't ready for prime time. They rushed it to compete with TPV's I think. I only seriously began using 2.x with the 2.1 releases. Here's why I think they released it when it wasn't ready.....profiles.

You remember how in early Viewer 2 when you opened a profile it opened in the sidebar, like groups continue to do? And the UI was vertical and not horizontal tabs, and you could only have one profile open at once? Which as we know, sucked. Then they made a web profile which was weirdly sized for the default profile window and took up too much screen space. Then later on ( came web profiles with social features...with horizontal tabs, that take up less space (but still more than 1.foo style profiles did.) When it comes to profiles...only recently has viewer 2/3 become tolerable by my standards, and I'm pretty darn tolerant of UI quirks, being nerdy.

There are also notifications....which is the ONE thing I truly and dearly hate about viewer 2/3....they don't show enough text and are in the WRONG PLACE. Look I wouldn't mind them so much if I could configure them to show more text...like 1.xx notifications..and if I could have them in the upper right...and if I could make them a nice cheery shade of dark blue with black text on white background within the blue frame...but keep the other viewer 2/3 UI colors the default.

You'll notice how I mentioned screen space? Well to me it seems that Viewer 2/3 UI was designed with high resolution widescreen monitors in mind, but LL forgot about the hardware issues I'll talk bout later. but for now it seems there's still plenty of people not running widescreen or running lower resolution widescreen like me. (1440x900 ) Early Viewer 2 did a sort of strange view shift thing with the sidebar in early 2.foo...which drove many people batty and they refused to use Viewer 2 because of that. Now they did fix it...reasonably soon, but I wouldn't be surprised if there aren't people who don't know they fixed it.

I was chided recently in a group chat when I said that inventory size doesn't seem to affect viewer stability and responsiveness at all....and it doesn't...for me. The person who chided me suggested that for people on low end hardware it could happen. Then I mentioned my hardware, which I consider low end:

Someone then said that they would love to have such high end hardware which would have made me spit a drink....because I consider my machine to be low end crap for SL, affordable crap, but crap nonetheless. Admittedly with that GT220 it's better crap, but the GT220 is still a VERY low end card. Now if I didn't run SL, it would be plenty of hardware for my needs, but I do run SL.

And scuttlebutt says Viewer 2/3 runs worse on low end hardware....it doesn't for me, it's always been better than Viewer 1 and it seems to look nicer. But some people have issues getting it to run at all. If that happens to you, try renaming your settings.xml so that the viewer starts with the defaults then manually change them back to what you use....that seems to work. Or it did for me in the late 3.0.2 -3.0.3 builds that I was having trouble with.

So, personally I like Viewer 3...for the most part...I can tolerate the things I don't like, easily enough, but I am a nerd. I also heartily recommend running Viewer 3 over any TPV, which have their own quirks and hardware issues. I also trust LL builds more than I do the TPV's. But IMHO if you want to run a TPV, it should be the Firestorm Mesh builds, though they don't do a 64-bit Linux build...course neither does Linden Lab...which I constantly complain about.
Posted by CronoCloud at 2:01 PM No comments: