Berry's Movie Poster Challenge: I do Breakfast at Tiffany's

Strawberry Sing has a new Movie Poster Challenge.  Well you know me and you know which film poster I just had to do: 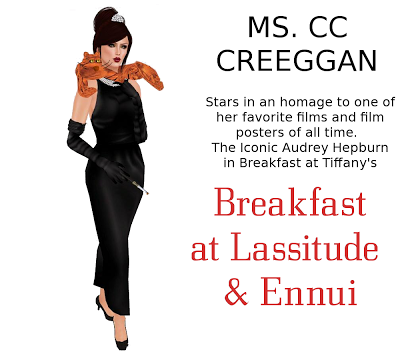 Being Audrey-worshiping me, I have several versions of the Iconic dress, which should come as no surprise to my readers.  This one is from Donna Flora.  While that dress does come with earring and necklace, it has no tiara, which is a shame, so I switched in a B.a.T inpired set from Caroline Apollo.  Hair is a new Truth release called Bobbie, and shoes are the Lola's from Baby Monkey.  Skin is Bellesa and Eyes are from IKON.  "Cat" is from Marketplace and is called Lazy Cat Orange Shoulder.

I freely admit that my all time favorite Jewelry store in SL was Miriel Enfield, who spoiled her customers with low prices, many styles, many gemstone colors and many metal options.  And the choice of permissions was right in the vendors.  How I loved the one I often called "Tar-Miriel". (That's a Silmarillion reference by the way,... which Miriel recognized...of course.  The name is Quenya and means Jewel-daughter.)

But then she was gone and I was sad because I missed my simply pretty diamonds and whatnot that she made.

But as I've said before My friend Salome has told her Jewelry making friend Sax Shepherd about the Blessed Miriel.  Now he's been making a bunch of nice boho, beacy, beachy sets which while VERY nice aren't exactly the things I can wear with some of my things.  As my readers know, I tend to be VERY classic, and love a good formal gown.

But then I was given a preview set of SSD diamonds and was forbidden on pain of death or worse by Salome from writing about them....they were secret.    I put them on and started sighed in delight and waited.

Then came the final release set, the Dione Diamond's. 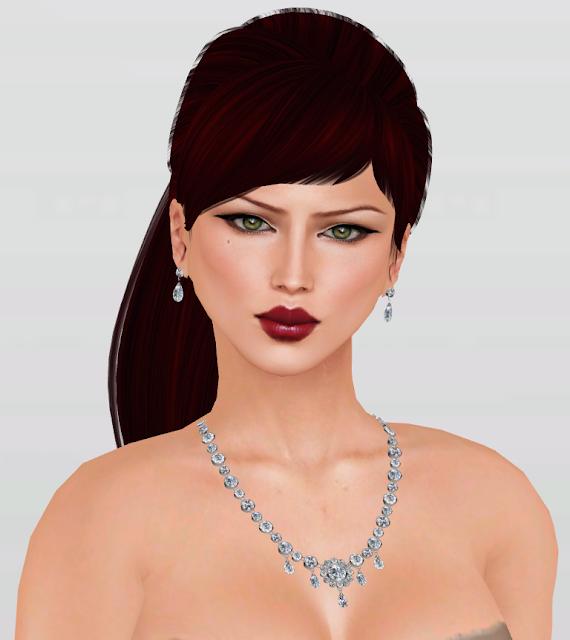 Damn right I was all over that!  It's.... Miriel-ish... well if Miriel was making Mesh jewelry that is.  This is an elegant luxurious set, for cocktail dresses, formals, fancy lingerie.. This isn't a jeans jewelry set, this is a statement set. This is the Platinum metal.  It also comes in a realistic silver  (silver tarnishes so it isn't so shiny) and gold.   I'm showing off platinum because I just love platinum as a metal.  I also like titanium but you'll pay hell finding THAT in SL.  There is also a set of additional dangle earrings in addition to those teardrop earrings in the set. 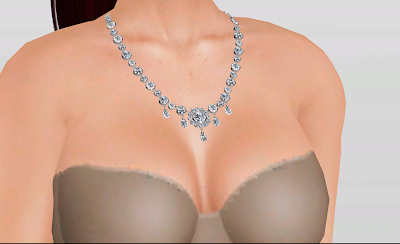 A nice look at the necklace there, pretty and feminine isn't it, it's so me.

Now while the set is Miriel-ish... Sax is NOT Miriel and he does do quite a bit of more...exotic influences... Like this Maang Tikka, which makes a nice alternative to a Tiara if you've got good hair for it. 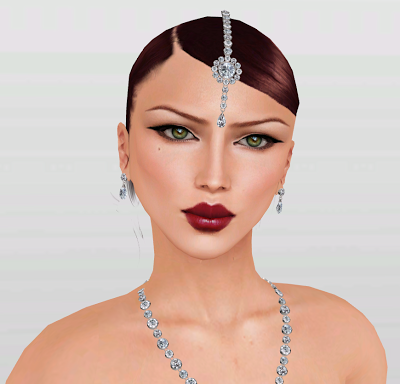 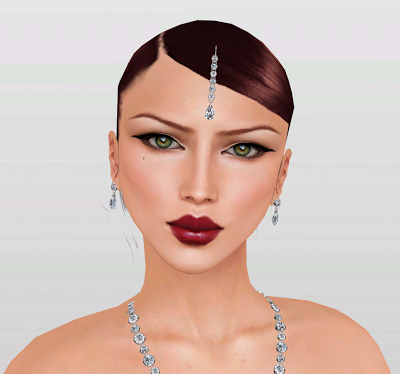 Also, he throws in a bracelet and cocktail ring.  I need to work more on the ring sizing, that was the hardest piece to adjust. 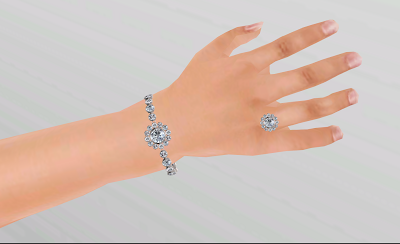 And a Tennis bracelet with BOTH right and left arm options. 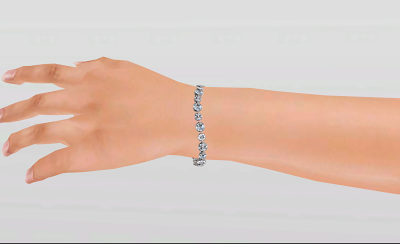 This set is Marketplace only for now.  You can buy the items individually...if you wanted to and are clueless because that will cost you MORE in the long run, than paying L$999 for a single metal set of necklace, bracelet, both head pieces, both sets of earrings and tennis bracelets and ring.   But an even BETTER deal is paying L$1749 for a 3 metal "Whole Damn Set"

I'm kind of jonesing for this set in more jewels.  maybe rubies or garnets, or emeralds, or black diamonds, or sapphires or.....  you get the drill.

Fitting note: The scripts are low lag, and the pieces are copy and mod.. which is what we want.  Since they're on marketplace they're easy to gift.

And if you're a Gentleman or Lady thinking of an SL sweetheart, this would make a very nice gift