The Big Trope! My entry into Harper Ganesvoort's Oscar Contest 2015.

The Story of the Big Trope starts with a Science Exhibition where a somewhat Mad Scientist unveils his newest invention:  The Macguffin Device.  We're not exactly told what it does, but apparently it does something because Millionaire Philantropist Kradox Durxok seems to be very interested in it, and with a name like that...he probably isn't a philanthropist.  This is when we first meet his lovely assistant Radclyffe Beaverton who steals the scene by flirting shamelessly with the Mad Scientist's Beautiful, but Hollywood Homely Daughter. (She wears glasses and librarian clothes and looks delicious.) And then when the Beautiful Daughter's Boyfriend Protagonist protests, tells him to lighten up and points out HER comradette-in-arms and Innamorata, Brinksy Corgi, as played by the inestimable Charlemagne Allen.  I'm glad the screenwriter didn't Hide Your Lesbians.

Cue a gloomy scene at the Lynden Lab building, where the Macguffin is housed, and we see Radclyffe and Brinksy fly up in a hover car that is made of the Rule of Cool.  They then proceed to steal the Macguffin, putting the sole human guard, a woman, to sleep with a drug laced kiss, and then having a waif-fu and gun-kata firefight with Lynden Lab's Mekka-Mole security robots on the way out after intentionally tripping the alarm...just so they could have a little fun. And they did all this in short skirts, stockings and stiletto heels with a sort of Sky Captain meets Stewardess meets Elvgren slash Vargas pinup sort of look. 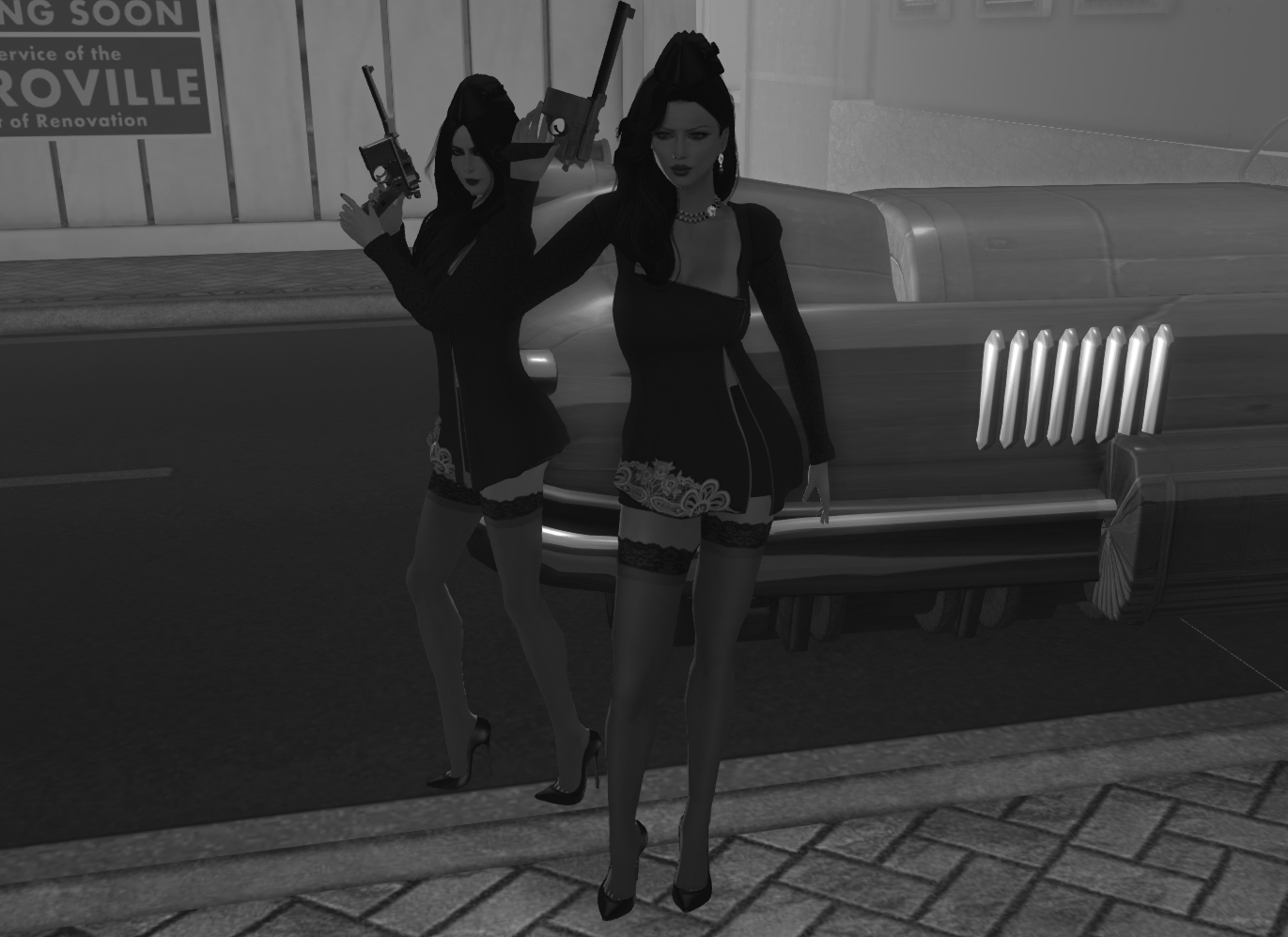 Outfits from R2, Stockings from Blacklace, Heels from Hucci, Hair from Wasabi Pills.

As you can see, the film was shot in black and white in the classic Academy 1.375:1 ratio as an homage to the old days. 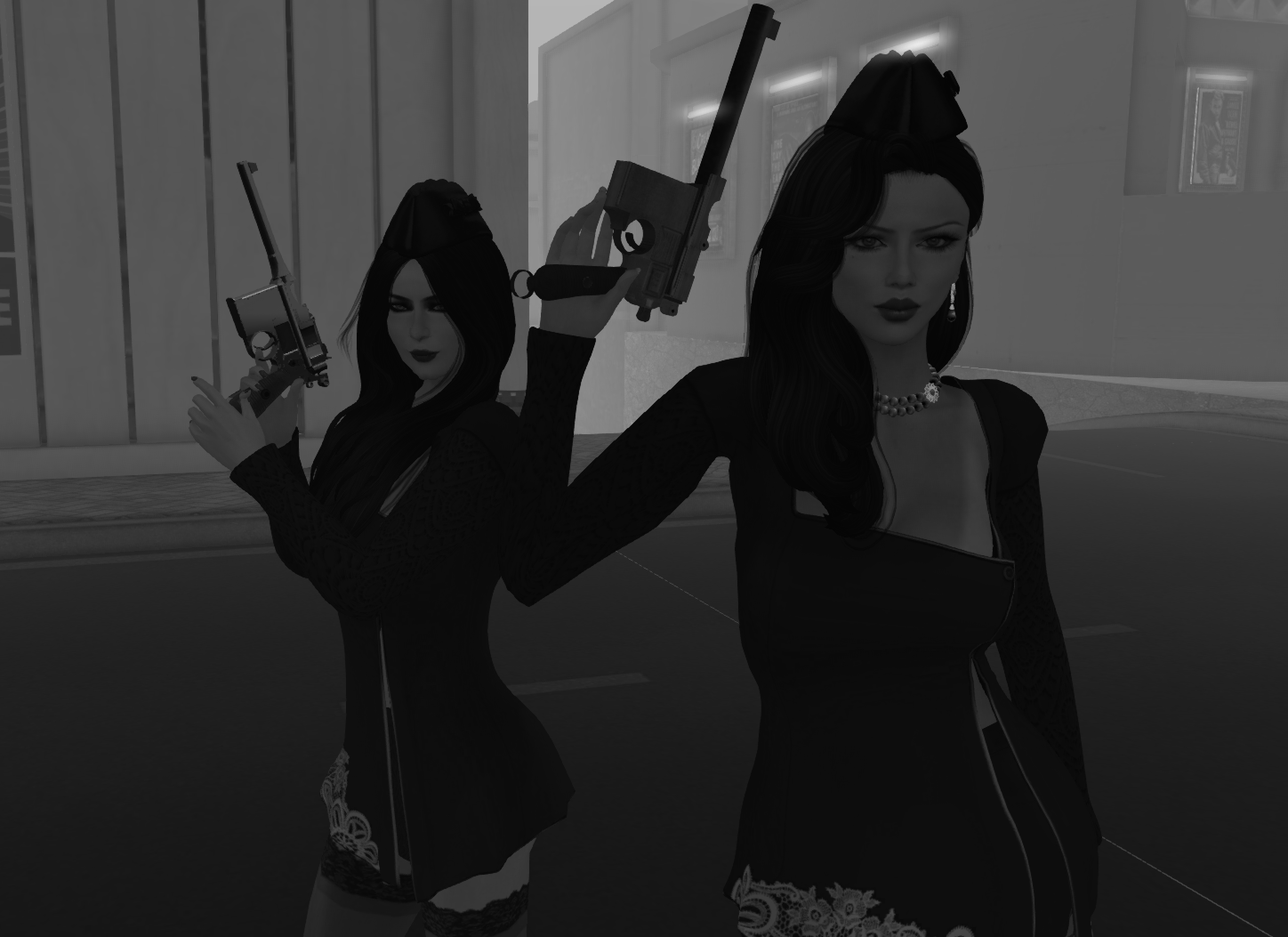 We then see Radclyffe and Brinksy hand over the Macguffin to the Big Bad.  They are then berated for not killing the guard, which causes them both to frown, and then are sent to acquire the Mad Scientist's Beautiful Daughter...they're told she has the secret to actually activating it. After they leave, The Big Bad tells his snivelling weasely junior lackey Peter Leech that she actually knows nothing and will be a hostage to secure her Mad Scientist father's cooperation in unleashing the Macguffin's full power, and that he believes that Radclyffe and Brinksy will do a High Heel/Face turn the moment they realize this since they believe he's a Well Intentioned Extremist whose goal is to Save the World from Itself, and that Leech is to kill them and take their place as his Dragon when he.... Kradox Durxok, rules the World as it's God-King with the Power of the Macguffin.

They then capture her at the University Library, where she puts up quite a fight before they subdue her.  They're so impressed with her spunk that they fly her to Paris for the sole purpose of getting her a glamourous makeover before they take her to the Big Bad.  They get her cooperation by telling her that they work for Kradox Durxok, whom she only knows as a philanthropist, and that on their honor no harm will come to her.  After the makeover, where they turn her into a Taylor Swift meets Mamie Van Doren Blonde Bombshell, they take her to the Big Bad.

Once they deliver her, the Big Bad desires her for her own and declares that the Beautiful Daughter will be his Queen.  She says "never" and then the Big Bad strikes her with the power of the Macguffin, brainwashing her into obedience and give the command to Leech and the Daughter to kill Radclyffe and Brinksy.  This, of course, crosses Radclyffe's and Brinksy's Moral Event Horizon and they do an immediate High Heel/Face Turn.

At first I thought the screenwriter had fallen into a Bury Your Gays trap, but then we cut to first a Medals for Everyone ceremony for the Boyfriend Protagonist and Mad Scientist, followed by a wedding between the Boyfriend Protagonist and the Mad Scientist's Beautiful Daughter.  There, as her bridesmaids, are Radclyffe and Brinksy who jointly catch the bouquet at the end.

As it is, CC and Charlemagne were, in an  unprecedented move, nominated for joint award for Best Supporting Actresses in a Non-Existant Virtual Film.  Which makes perfect sense, since they're the best thing in the film. It's why I've been focusing on them and not everything else in this modern-day B-picture. The Boyfriend's actor is dull, the Ingenue they got playing the Beautiful Daughter can't even pronounce Tesla properly, and the Big Bad hams it up more than Jeremy Irons, Alan Rickman, Gary Oldham and BRIAN BLESSED.....combined...in a ham canning facility...which is just too much ham 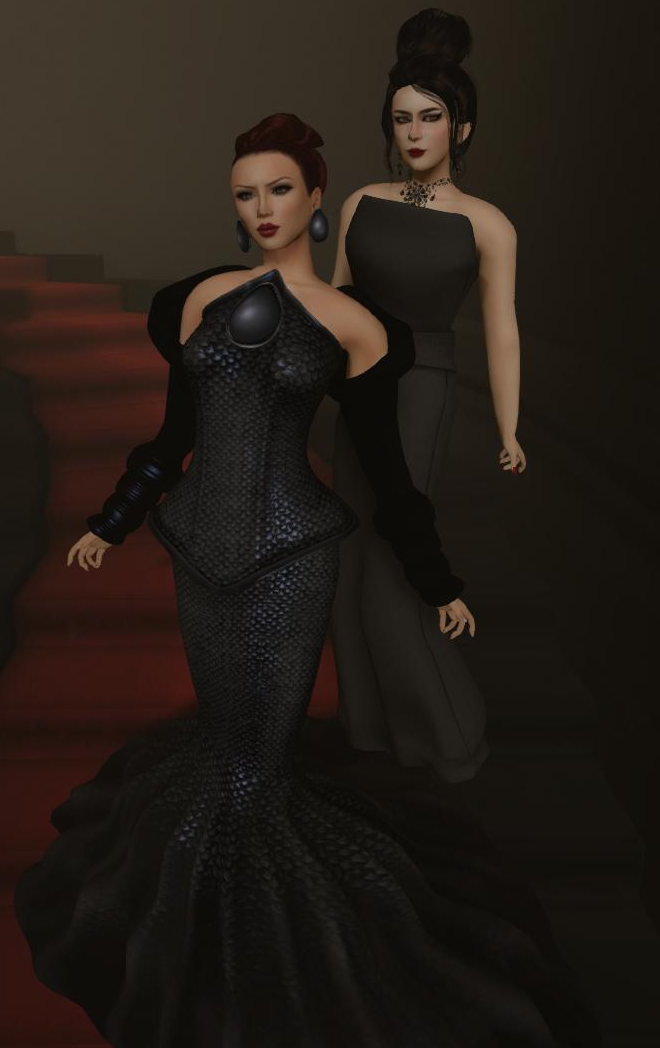 Ms. CC's Gown by PurpleMoon, Eclair Hair from Amacci. Ms. Charlemagne's gown by Metatheodora
Posted by CronoCloud at 10:45 AM No comments:

Amongst the games I've been playing is Freedom Wars on the Vita.  I kept seeing mention of it on the various nerdy sites so I picked up the physical release...For the Greater Good.  I am surprised that Iris Ophelia hasn't mentioned it on New World Notes, since it's Japanese and has plenty of character customization.  I googled and she actually does own the game.  I didn't even know she had a Vita since she seems to focus her portable game attention on cutesy-kawaii games for the 3DS.

The Basic plot is:

It's the future and the world is a Crapsack Dystopia where everyone lives in city states/prisons called Panopticons and the Panopticons compete for scarce resources. (Panopticons are a style of prison in RL, the more you know!) You, are a "sinner" a prisoner born into servitude to your Panopticon and The Greater Good!  Apparently you weren't just a rank 1 sinner at one time, but you lost your memory and got reduced in rank and  your full sentence returned to you. Your sentence... 1 million years.   You're going to die in your cell "sinner" unless you agree to take on missions.... For The Greater Good.   You'd better, because without taking on missions,  you won't even have the right to lie down in your cell, doing so without earning the Entitlement gets 10 years added to your sentence.  Of course, if you refuse to lie down your cute but creepy anime-style Mean Robot Overseer will add on 10 years for refusing the gift of leisure.   He or she...you get your choice, will also add years for walking more than 5 steps at a time, talking to Sinners of the opposite sex, and talking to actual Citizens among the many many things you can be penalized for.

Once you go on missions, you fight other Sinners and  giant robot enemies called Abductors who have captured valuable Panopticon Citizens...Monster Hunter style.  Yes, it's a Japanese game and has many of the "quirks" Japanese games have these days.  UI that needs work, grindy gameplay, japanese only voices and control quirks.  To be honest, the controls only suck until you become able to change the controls a bit into the game.  They're actually MUCH better than Monster Hunter...once you can change them into something REASONABLE for a 3rd person action game with guns and melee. They did leave in the option for that silly impractical "Monster Hunter Claw" for the Japanese gamers.   If you're not at least a little bit of a Japanophile, you probably won't like it.  Personally, I find it more fun than Monster Hunter for darn sure. And it actually has proper online play instead of just being limited to ad-hoc wifi.


Here am I in my cell with my Mean Robot Overseer, aka my Accessory.  Behind me on the viewscreen is the mascot of the Dystopia, Percy Propa (Propa-kun in Japan)  Those two things with blue glowy dots at the top left and center of the screen are monitoring cameras...they don't watch you even though the Accessory watches you 24/7! 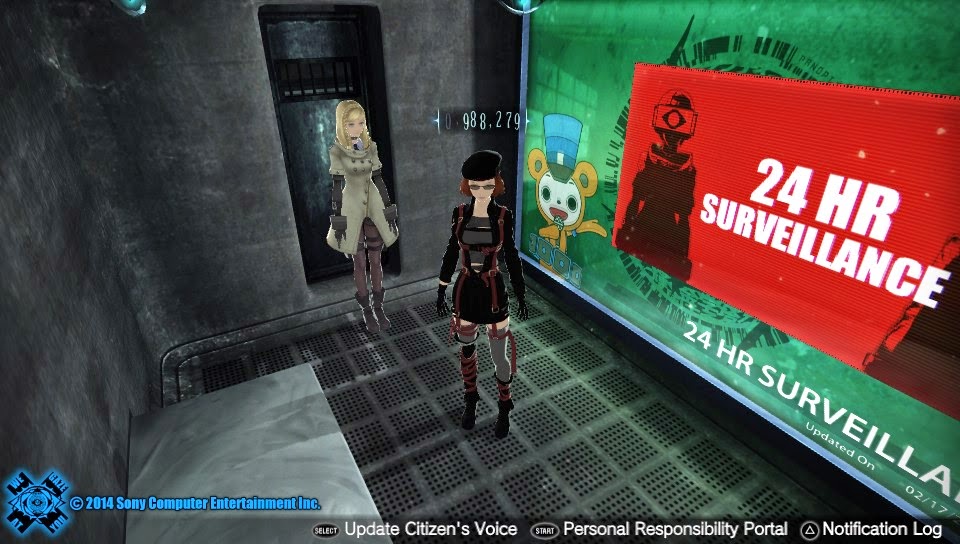 There's a ton of character customization. You have to earn most of the clothing with entitlements, but you get to choose your characters body, face, eyes, hair at the start from quite a few options.  More than I expected from a Japanese game.  That also applies to your Accessory.  Male or female, tall or short, hairstyle, cutesy girlish or slightly more mature like mine. 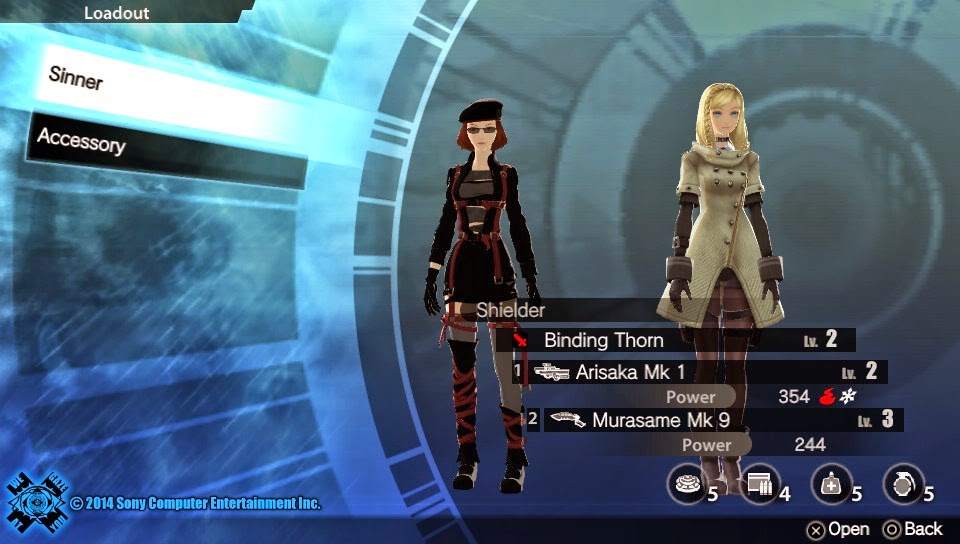 You have to earn color palettes too! 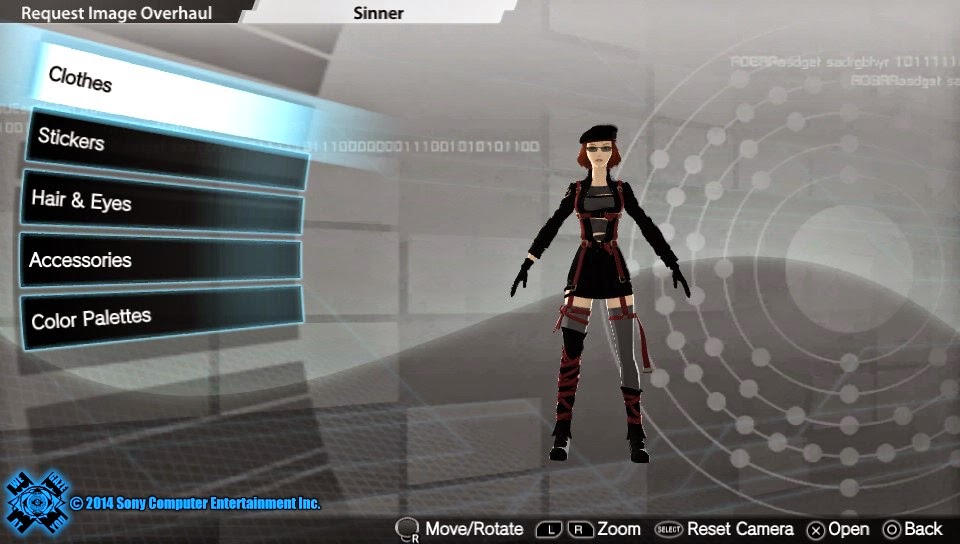 My Mean Robot's outfit is cuter than mine. You know, as much as everyone complains about lack of resources and how people are a drain on society...all the Sinners have their very own Mean Robot. 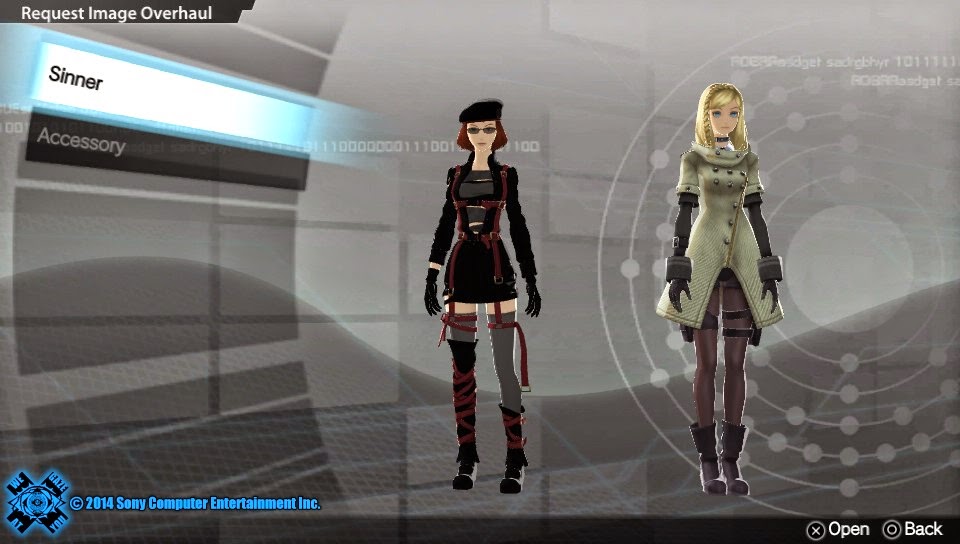 Yep, I'm a redhead with green eyes in Freedom Wars too. 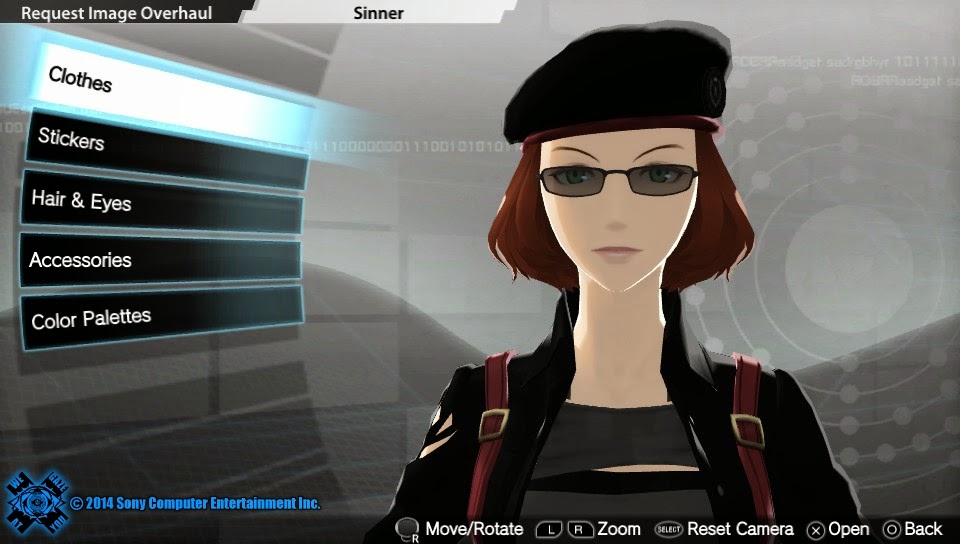 My Mean Robot has a sort of "Village of the Damned" thing going on there.  I've just earned the right to customize the orders I can give her. 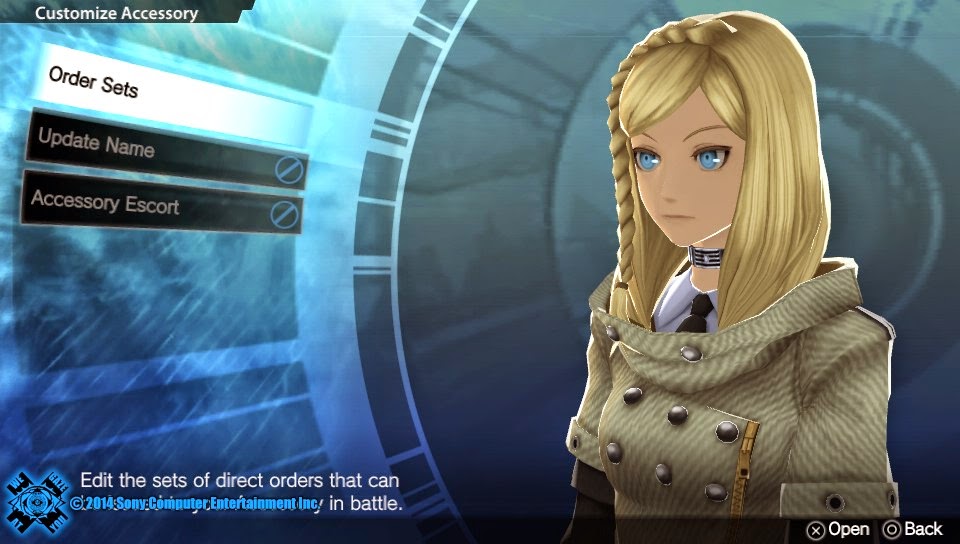 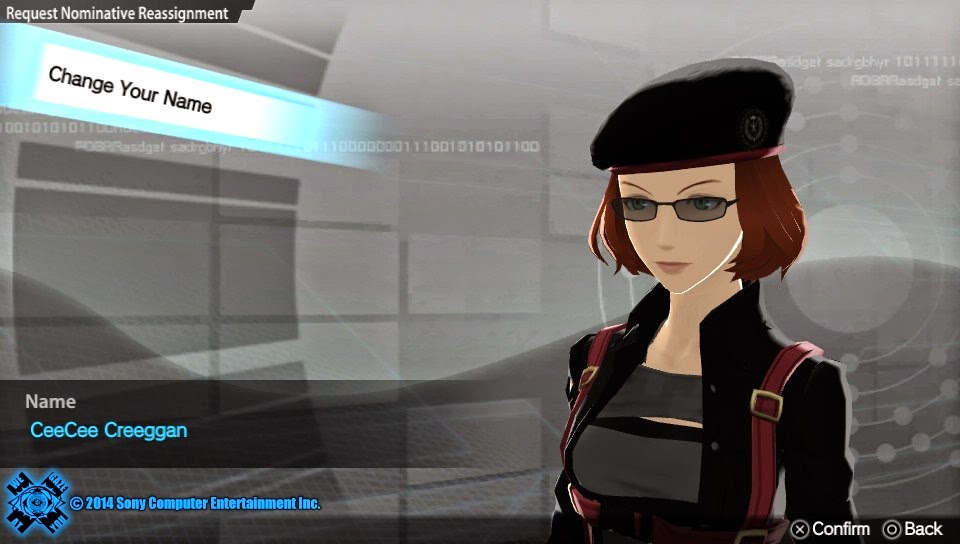 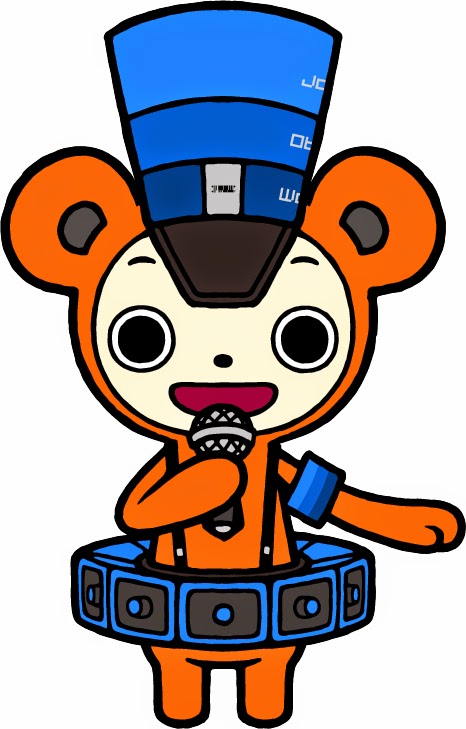 Posted by CronoCloud at 3:53 PM No comments: