Miriel Enfield is shutting down her store

In the next few weeks she says. It makes me sad, Miriel was among the first jewellery stores I visited in SL, along with Lassitude & Ennui and I found the kind of jewellery I wanted to wear and liked there. Pretty!

And then she did eyes, which are my favorite eyes in SL, and are among the "fashionista favourite eyes" in SL. She did hair, prim lashes, and clothing too. And the trees she worked so hard on. Her vendor scripts were so good I wanted to have their prim babies. You see with Miriel, you could choose your metal and favourite gem color using the scripted vendor in either copy or transfer. Anyway I've decided to showcase some of Miriel's stuff.

That's the Flora gown and Eleanora hair in Chocolate. 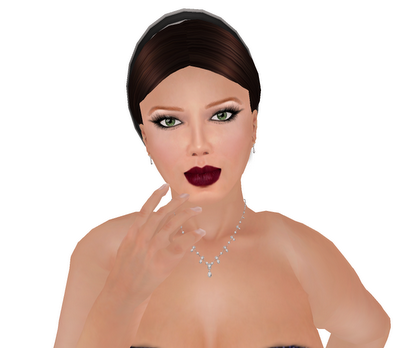 Here you can see her Glamour prim lashes, the Beatrice jewellery set and my favorite eyes in SL, Miriel's Vivid Natural's in Strong Green. You see me on the grid, I'll be wearing those eyes 99% of the time, and if I'm not wearing those, they'll be one of Miriel's other pairs. I prefer the smaller irises, you see. Miriel often wore Tete a Pied/Fleur skins and I'm wearing a Fleur Allure Kitten 3 skin in Truffle.

A few other things of note, one of the reasons I loved Miriel was because of her ads, the models were just simply pretty and some of them looked like me, which made me double-take once with a ETD Maaliyah wearing redhead. Since they were so classic looking it was easy to tell what I wanted and what would look good on me.

And finally, I never did get around to begging Miriel for her "sim-killer" jewellery set. :-)

Miriel is also nice. I'd have her prim babies in an instant and I will miss her stuffage in SL. Though I'm hoping she decides to hand off her inventory to someone else to sell for her, it would be a shame for all of the beautiful things she has made to be unavailable in SL.

Recently designer Grace Winnfield did a kind of a model search and posted her requirements for the model's shapes:


4. You must be willing and able to mod your body shape (not face) to within the params outlined below. The note here is a guideline of ranges into which you should fall to give the right feel to my clothing in the photos. The clothing is designed to fit any av size, however to look the most true to my original design i prefer this range of sizes.

Go into edit appearance and click body
follow the measures down.. I will highlight and give a range for the important ones:

Body thickness: less than 7
Body fat 0 preferred but no more than 7
Torso Muscles should be less than 40
Shoulders should be proportionate but usually less than 50.
Breast size: LESS THAN 40 PLEASE (mine are around 33)
Arms length… you are taller so your arms should be longer… probably between 60 and 69 and finger tips reach just around or above your mid thigh. Mine are at 67
torso length… we dont need long torsos so less than 55 but not too short so shorter than 44
Love handles…. between 15 and 20
not too muscular please … less than 47 but we need some tone so more than 40
leg length.. LONG!! somewhere between 80 and 95 is usually good… mine are 89.
HIP WIDTH: NO more than 48!!!!!!!!!!! ( remember i use a lot of system skirts)
Hip length shouldnt be very long.. keep it less than 37 please.
Butt size less than 30 (ALOT OF SYSTEM SKIRTS SO SMALL IS GOOD)
Saddle bags less than 25
foot size 0 so that all shoes will work.


Since lots of other fashionistas were doing it, I did it too, making collages comparing the shapes I've used since I started looking like how I wanted (since about late July of 2006) 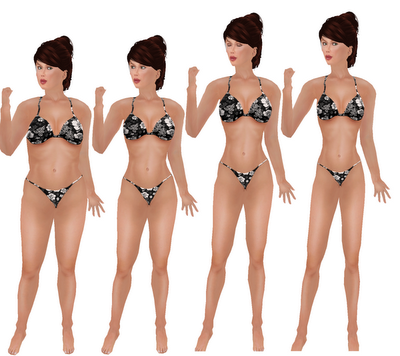 From left to right, theres Plus Size CC, Catalog Model CC, Supermodel CC and Grace-ified CC. I based the Gracie version of me on my Supermodel shape, which in itself is a modded freebie and I knew would be closest to what she wanted. Supermodel CC was my default shape from late July of 2006 till sometime in late 2007. Then I began using Catalog Model CC. I made Catalog Model CC after hanging out with Boss Sabrina and Tanya book, who had more realistic shapes than I did. She's a mod of the Supermodel shape that's about 8 inches shorter, with a touch more muscle and a bit more body fat. As I say sometimes Catalog CC is the woman who does her yoga and pilates every day so she can still fit into a size 6, but she wouldn't turn down a muffin now and then.

I've discussed the origins of Plus Size CC before, though I do admit she's pretty small for a plus size avatar. If she had a bit more of a waistline and was a few inches taller she could do plus size modelling in RL. 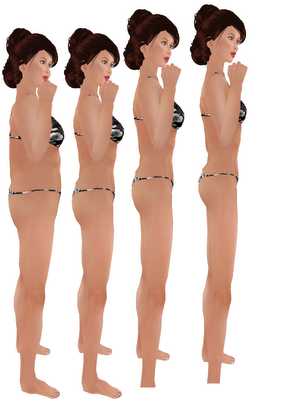 You really can't tell how much taller Grace-ified CC and Supermodel CC are in the pictures but they are, considerably. Couldn't figure out how to get the camera to really show the differences.

Yes, Grace Winnfield is the designer and can choose any shape she wants to model for her, but frankly of all the CC's, Catalog Model CC is the most aesthetically pleasing to me, and if I was a designer, that's the one I'd have model for me.

That's a Fleur Allure Bare 1 skin in Truffle in the pics.
Posted by CronoCloud at 2:17 PM 1 comment:

My Mother passed away.

She'd long had health issues, ever since I was young (over 30 years now), and I was her primary caregiver. She is best described as spunky or feisty, even as she got older and less well.

She knew about SL, and I had mentioned my avatar and shown her a few pictures but had no interest in it herself. She did think my avatar was pretty. I put a few pictures of her in a set on my flickr:

Pictures of my mother

She was something of a fashionista herself in her younger days and even until recently she still did what she could, she was very proud of her fingernails, which she did herself. I never did learn her secrets on that.

It's kind of hard, her dying just before my RL birthday (the 9th) and mother's day.