Sometimes I just want to smack the oldbie crank commenters on NWN.

Really. @#$# oldbie cranks with axes to grind! What's funny is that I'm one of them too!

RP sim's aren't viable long term, no, not even with cheaper tier some of the oldbie cranks go on about, because when they lose their "funding angel" they go down it's that simple. They simply DO NOT PAY FOR THEMSELVES RP groups really ought to start charging fees to enter their land and fees to support their groups, donations aren't going to cut it if the "funding angel" has a bad year and needs to cut back or gets bored with SL, or annoyed with the Drama of RP groups. The tools do support access fees you know.

It's one sim. But that is how it starts. If LL loses its RPers, its over. They've already lost the business world. The educators and nonprofits are seeping away.

Oh Iggy, the hardcore RP community in SL is miniscule. the clubgoing howlzers outnumber them 10 to 1 at least, even in the old days hardcore RP was a niche.

Oh Iggy, you're like those Slashdotters that think everyone thinks like them and wants to spend lots of time tweaking/building and messing with computers rather than just buying something that works without fiddling. You know the ones, who t hink that because their nerd games like Eve Online are 90% male, that SL is as well. They're the ones who keep that "there are no women on the internet" meme going.

But, Iggy, The Barbie girls...they outnumber you and the people like you by a HUGE margin. Haven't you SEEN the HUGE number of SL fashion blogs? Do you not realize that avatar appearance enhancements, drive the SL economy? In other words, the Fashionistas basically run SL behind the scenes. They have for quite a while now. They're the ones spending the money. Skin Fair? Hair Fair? Sin Fair? Fashion for Life? Vintage Fair? Fantasy Fair?

There's tons of old fashionista centric regions STILL going strong. Because unlike college students popping into SL for a class project, or Open source obsessed nerds who buy their furry avatar to make a statement against the "Barbies" (and also say how they didn't have to pay for their furry form on opensim because it was "free") and then spend the rest of the time building Battlemechs or starfighters in sandboxes, fashionfolk spend money. A LOT of money. Look, Iggy, read these posts by Salome Strangelove, that'll help you understand I think:

about misogyny and denigration of fashion play

The real reason some of the cranks exist is...the hardcore builder/scripter nerds aren't the center of SL anymore, LL doesn't need to cater to them like it used to. I'm lucky, while I'm a nerd, being a fashionista means that I don't feel as alienated from modern SL culture as folks like Orca Flotta or Shockwave Yareach or foneco Zuzu seem to be. Once there were quick build contests, and everyone driving around in vehicles, and hanging out in the nerdy places the "builder/scripter" crowd enjoyed. But not anymore. Now there's voice, not just text and there's a horde of 25-45 year old women going around SL, and they tend to not go to Aerodromes or space museums.

I think that folks like Orca, Shockwave, etc, kind of feel betrayed, like SL turned it's back on them...they helped build it, they were the pioneers and now it's "fine fine, you helped kickstart SL, but we don't need you so much anymore, now shut up about sim crossings, only the cult of the vehicle and a few steamlanders really care about that, everyone else TP's everywhere so it's not our #1 priority so just be quiet and go back to fiddling with your vehicles in your vanity sims that you basically use as sandboxes." You can see it in how Orca and the others talk about "The masses" and how they feel ignored. They don't want new users...they want to go back the way it was, when people like them were a larger portion of the SL userbase.

But deep down they know SL needs new users and they resent it, and it makes them oldbie cranks...grid love em. Now they spend a lot of time bragging up opensim...which is nerd centric like the old SL...not very many Barbies at all there. But what they don't understand is that the most important part of SL isn't the prims or the scripting or all the things the builder/scripter crowd holds up as the greatest things in the universe....it's the people. And opensim is going nowhere without people. Sure the nerds love it, but it's not going to grow beyond them, and the educators who want a cheap region to bring a few students in, without the Barbies those people dislike. No currency, no shoes, no people, it's that simple. And while there are some opensim based worlds that DO have currency, why would I go to one of those Tiny little markets when SL is so HUGE. Those places are just SL...without the community. They're going nowhere, because ultimately, they depend so much on SL that they ARE SL, under different names. They're SL for people who want to say "Fuck You" to LL for various reasons (too many barbies, region pricing, ignoring sim crossings), without actually giving up SL.

So there you have it, a rant from an oldbie crank...ME, about OTHER oldbie cranks. I understand "why" they write what they do, and I feel for them, even if I don't agree with them.

By the way, Pussycat Catnap is easily the most commonsensical voice of reason commenter on NWN these days. Well worth reading.
Posted by CronoCloud at 2:20 PM 4 comments:

I'm not one that's really majorly a follower of the SL live music scene, though I have attended events now and then. A semi-Random SL group chat lead to talking with a singer in SL, this is one of her songs, which appeals to me, quite a bit. I think it's a sweet song, and I have permission to link to it.

She's open about linking to her outside of SL web presence at:

Another quick post while I have the pictures ready.

While I'm known for not dressing casually and usually, but not always, being the most dressed up avatar at my usual hangouts, even I wear jeans sometimes. It depends on my mood, mostly and who is around me.

The cardigan is the Comfy Cardigan from Fri.Day.The camisole is from the late lamented L`Abel brand from Neferia Abel....that was her branding on her modern stuff, it isn't available anymore. How I miss L`Abel, but I did manage to pick up most of her L`Abel inventory in the closing sale.

The Jeans are a new acquisition from Tres Blah, the Juju's, that my friend Clarice gifted me with. That's the black but they come in other washes, and I'll probably be picking up the dark rinse at least. You have choise of three different prim style leg attachments, straight, Flare, and rolled up. (Didn't take the time to do all 3.)

The flats are the Basic.Flats from fri.day.

The hair is a cute modern shaggy style called Gala from Queue Marlowe's Analog Dog, under her "just .b" brand. That's the Fox color, and as I have said, I like Queue's reds.

The whole outfit reminded me of the outfits you see the actresses in Swiffer/cleaning supplies/Glade candle commercials wearing, you know, the whole "I'm a cute young mom in a cami and cardi, hip jeans and ballet flats" look. So I pulled out my retro-vac from RC (Redd Columbia): 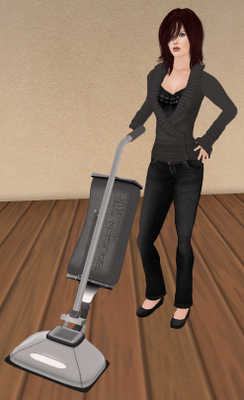 SLURL to RC
Posted by CronoCloud at 2:38 PM No comments:

Clarice is yet another member of what my friends and I call our "family", kind of like sisters of fashion. One of the things we do is make each other buy stuff. Well, not exactly make, it goes something like this, only with more words and not as succinctly and without LOLCAT speech:

Some time ago, Clarice showed up at one of my favorite hangouts wearing a lingerie set I didn't recognize underneath a flannel shirt and jeans. Now even though I didn't recognize the set, and thusly didn't have it already, I did recognize the work, I know Camilla Yosuke's of Insolence's work on sight. Since Clarice was the one that "made" me buy it, she and I modeled it together. She also made me buy the flannel shirt.

It is named Lauren, it has the usual Insolence options, with corset, without corset, on various layers, garters no garters, 4 different pairs of stockings. Etc etc. But the important thing is that it was pretty, and CC NEEDED it.

Clarice is in the Red, and I am in the silver. 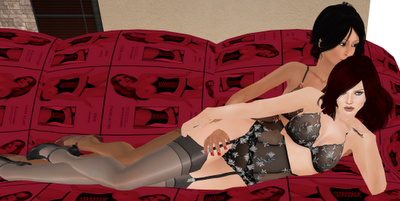 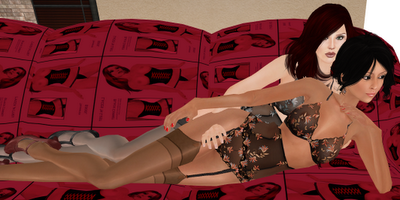 And a standing shot of the Red, it comes in more colors, and I don't have them all....yet. I know I will eventually. Included stocking colors are white, tan, off-black and black.

Clarice also made me buy that hair...it's Truth: Jean. How I adore Clarice...who makes me buy stuff. And yes, I asked her for permission to post these.

I forgot to ask about Clarice's skin and hair, I know, bad CC. But my skin is of course a 5th & Oxford, Fair Subtle 6. No prim lashes today, but I've been favoring the Beetlebones mesh ones lately.

The shoooooooes, are oldies but goodies on both Clarice and myself, Shiny Thing's Kelsey T-Straps. She only has them in that color...I haven't "made" her get the Willow Pack (what other people might call a fatpack) yet. It's all part of CC Rule #1, of which one states (there are multiple rules #1): Which colors do you need? All of them.

SLURL to Shiny Things
Posted by CronoCloud at 2:00 PM No comments:

I was in one of those moods, trying to figure out what I wanted to wear next....I was actually wearing trousers, a simple shirt and short hair at the time, believe it or not. Donna Upshaw-Bouscario of FE made a suggestof jeans or goth...said I had to get past the "Ice Princess" That made me laugh, because Grace Kelly is one of my style icons.

So I headed into inventory, and remembered I had a recent dress from Silentsparrow, Selador, I first saw it on retro-fashionista Ceejay Writer in Seraph City. It comes with 3 skirt options.
:
The more gothy victoriany steampunky Woofy version. (Thats what it's actually called in inventory, Woofy!) Nice layering effect on the skirt and underskirt.

And pencil, which is what Miss Ceejay was wearing when I first saw it and NEEDED it. I so love a good pencil skirt:

You probably noticed there's a pastie option, which is on the undershirt layer, along with the regular low cut pretty bodice. Boobie shot! 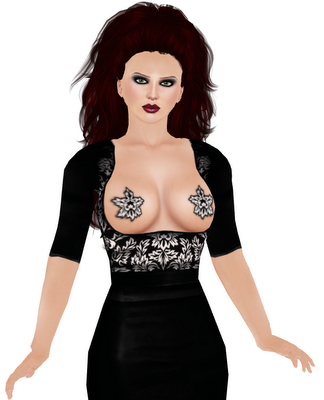 I had these antique embossed tall laced boots from Arwen's Creations. Sort of Victoriany sort of steampunky, with a high, but sturdy heel. They are VERY nice and I want them in RL. I have 3 pairs of these and keep intending to go back and the other colors. 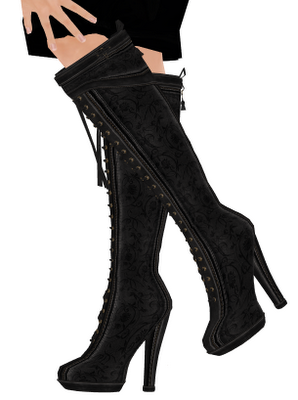 With Truth Andrea Hair, which I think of as Counselor Troi hair, and a 5th and Oxford "Fair NightFall 1" skin heavy on the dark eyshadow with fuchsia lips. 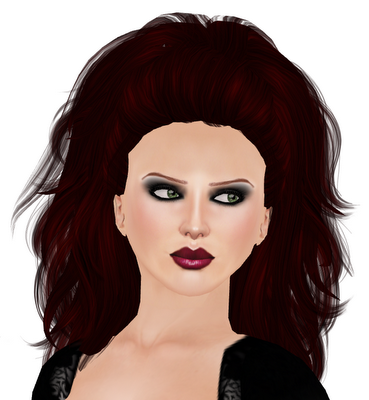 When Mrs. Upshaw-Bouscario saw my pictures, she described them as "Beer Barrel Goth", explaining the post title.

SLURL to 5th & Oxford
Posted by CronoCloud at 7:36 PM No comments: