I was watching the ISC group chat and reading Mrs. Lanley's words and decided to take a visit. Like most oldbies I know how to find people, figured she was on her home region puttering around and she was. (I've been there before). She welcomed the company and we chatted as she showed me some of her favorite bits like the new dock she put in, which was nice. Well anyway she was just standing there, and there was somthing about her that made me want to take a photo. (I asked Mrs. Lanley's permission to blog and post photos) So I did my thing and got a few nice ones


This was the first, she was just standing there and I thought the water would make a good picture. I did a quick change to sunrise: 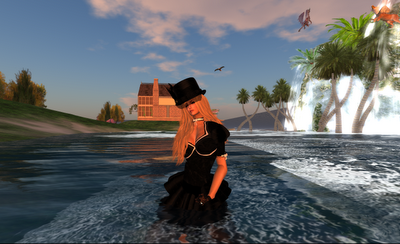 The next is of us together. After I showed it to her she laughed about how much taller she was than me. (We also played around with shape settings a bit later, which was fun.) 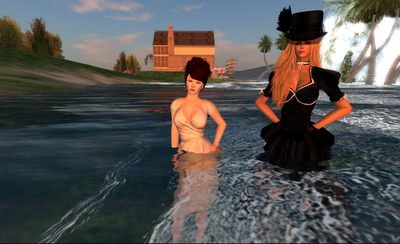 Now I wanted to get a photo of myself on the dock, so I turned up the settings, this has shadows and depth of field turned on: 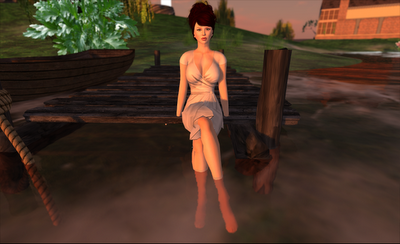 And since I know Mrs. Lanley doesn't have good hardware I wanted a lovely portrait style photo to give her so I did this one with the Paris 2 windlight setting, shadows and depth of field on. Very lovely: 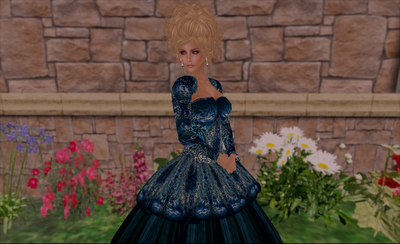 And yes, that's the Icing Joan I'm wearing. And yes, I have it in ALL the colors. It's Icing...It references Joan Holloway...what do you expect.
Posted by CronoCloud at 4:59 PM No comments:

There was someone in one of the fashion groups that was looking for shopping advice. What she wanted was "French Chic/conservative/Ann Taylor" stuff. So of course I chimed in, considering I've mentioned Ann Taylor in regards to SL Fashion before on this very blog. After she had got some great advice from the group, I met up with her after tossing her some LM's asking if she'd like some shopping company. She eventually gave me a link to the sort of thing she was looking for:

Armani Side stiched Jacket and dress on Saks Website

An image from the Saks site is below. 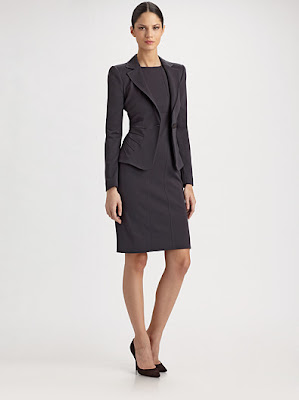 I laughed in IM, and she wondered why I was laughing and I told her I had given TWO people that very link in the past 24 hours to show them the sort of tailored elegant look I like to portray in SL, when I can find it. Most of the time I have to settle for retro...perhaps with mesh we'll see jackets like that.

So anyway I took her to the usual haunts for classic tailored things. We all know the drill. We hit up Lo Lo sim (Caroline Apollo) for jewellery, good place to hit if you need quality basics at good prices, and saw Caroline there.

I also took her to SF designs, where I had been a few hours before to pick up THIS on recommendation of Cousin Savannah Blindside of Caledon:

It's your typical ladies who lunch suit, though I'm wearing the short skirt which makes it more "20-something little miss junior league junior socialite who likes her skirts a touch shorter and heels a touch higher" (I actually knew of someone like that in USENET alt.fashion), but there's a longer skirt option if you want to go for the mature charity luncheon look. The outfit, with the short skirt anyway, actually reminded me of this dress from Donna Rico:

It really is lovely, comes in three colors too. However, the fabric looks fall-y and "heavy" like a nice thick dressy wool.

Mimi is available at the SF Designs for Women

The lady and myself had fun, we both discovered we had been fans of Ally McBeal and she commented on how some of the tailored skirts she had seen were Ally-short. And she swooned over Donna Flora's version of Audrey's famous Breakfast at Tiffany's dress. I helped her a bit in creating a skirt shape, and wanted her hair. She was wearing Elika's Rhythm style, which resembles the old ETD Roslin...but doesn't come in the dark reds Elika used to have...sigh.
Posted by CronoCloud at 2:57 PM No comments:

Why Second Life is like tabletop gaming...or "Why certain virtual world pundits don't get it." 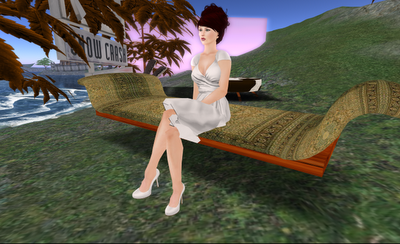 Ah, those Virtual World Pundits. They make CC laugh. They say things like "zOMG, SL isn't popular and Facebook is so SL should be more like Facebook because unless it has double digit growth every month it's a failure". And then you discover that they spend 12 hours or less in-world...a month. No wonder they don't appreciate the in-world communication tools...they're not in-world enough to use them. And as for 12 hours, I can easily exceed that...in less than a week.

See, what those pundits don't understand is that SL...is like D&D. Not D&D Online the MMORPG....but D&D the tabletop experience. Let me explain.

D&D requires a TON of time if you want to do it right. A single encounter with multiple enemies can take up the entirety of a single session. That's not counting the paperwork and record keeping involed. Not only that, but the Dungeon Master's workload is even worse, creating a world, creating adventures, it's a major time sink. It's why there's never enough DM's. And there's the scheduling issues...can you find a time that matches a DM's plus other players? That is VERY difficult

Only a small majority of nerds want to go through that hassle these days...and some can't because of time constraints...so what do the others do? They play WoW, which although grindy, is no where near as complex as D&D. And you can play on your own schedule and STILL play with other people.

D&D is also expensive...you need your supplements and books.

D&D is not exactly the most newbie friendly game in the world, it's "UI" as it were is very complex and it has it's own vocabulary and a community that has it's own ideas about things.

Not only that, but that community complains every time some new sourcebook with additions is made or when a new version of the "UI" aka the rules is released.

So what does all that remind you of? SL. Like D&D, SL is a niche, it doesn't have to be Facebook. Those people who only log in for three hours or even a dozen hours a month...they're not SL's market. It's the people who spend a hundred hours a month in-world that are. Even if you're a content consumer like me, you still have to "work" for your fun in SL in a way that you don't in other social things. Most people don't want to do that....they want to start their crops, let the cows do whatever...while they're watching American Idol. SL requires immersion in a way that Facebook doesn't.

Here's an anecdote....my sister does her Farmville, while she watches TV. I wouldn't dare do SL while watching TV. There's people in SL who get in a little bit of a tizzy if they even think you're alt tabbed out in a web browser or in multiple IM/group chat sessions. SL requires attention in ways that Facebook doesn't....so the Facebook crowd isn't SL's audience and it's useless to pursue them in an obession for "Growth".

SL doesn't need rebranding. What it needs is for the pundits to figure out that being a niche product for a niche market is a fine and good thing in and of itself.
Posted by CronoCloud at 1:56 AM 3 comments:

I've not mentioned the new "makeup layers" in Viewer 2 very much since I don't use them very often, relying on my trusty classic 5th & Oxfords....but....if you you to ask me: "Hey CC, where would you go to buy makeup layers?", my first answer would be Mocksoup Graves"MOCK"

Mocksoup, like Roslin Petion of 5th & Oxford, is a makeupista in RL, and it shows in her makeup. And she understands makeupista talk, so when I tell her, "I'm an NC20 and I need a gloss like the Juicy Tubes" she knows EXACTLY what I'm referring to. She also makes a ton of colors in her eyeshadows, lippie formulations and whatnot. 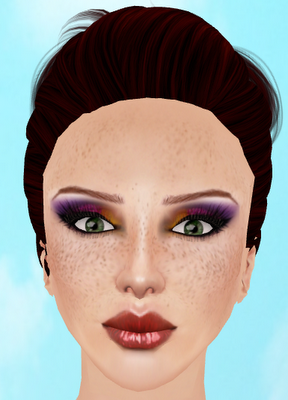 That's the L'Eau Russian Red Lipgloss combined with the Tonal Gold Complements eyeshadow over a 5th & Oxford Fair subtle 1 skin. That's one of the best lip glosses in SL, it really looks like one.

Was working on an outfit for "Fairs" even though I don't often go to them since I find most of them annoying. For low-arc I go with system outfits, minimal prims and static non-flexy non-alpha things. It also means no-jewellery either. This is what I have today, though I've used similar outfits in the past:

Hair is an old ETD, Roslin in ETD Mahogany that Elikatira doesn't have an equivalent to. The ensemble are Cinzia jacket and Sonia skirt separates from L'Abel, which is having a sale at the moment.. Pnatyhose are from Insolence, the "Carmen's", and those are the Fri.Day Basic flats.
Posted by CronoCloud at 9:18 AM No comments: