Imagine an attachment that attaches at your chest and blings in the general area of one's boobehs. Also imagine that said device comes with a gadget that quotes Swirly Cyclone of the Fashion Victim blog and that whenever a quote is said, it sends out a particle burst.
Also imagine that said device is only 10$L. Is not this device desirable? Is it not Swirly-icious? Yes. 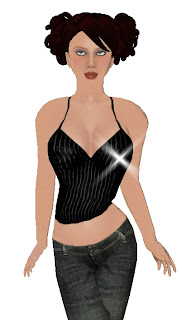 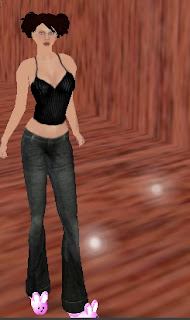 Also available is the Everglow Beauty Light, which bathes the face in a flattering soft glow, essentially it's like carrying a portable light source with you.

Acquire at the Kriss Lehmann Gallery at secondlife://Solbim/113/17/55

It's baaaaaaaaaaaaack. One of my favorite ETD styles has returned to ETD as Patootie II. Patootie wearers across the grid will be pleased. And all the new folks will no longer be deprived of Patootie goodness and its available in Elika's new textures, like the luscious new chestnut.

A shot of me wearing it in front of the display in Elika's new hairstyles section. Oh Patootie, how have I missed you. This is the new mahogany shade. That's Tete a Pied Seductress Scarlet (redhead version) skin, and a Dazzle dress, that I didn't note the name of. But it's not available anymore of course. :-) 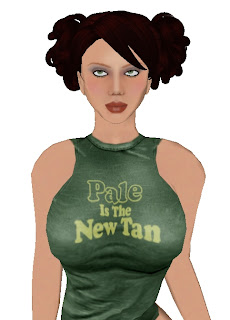 Acquire Patootie Goodness at the ETD store on ETD Isle.

I just had to see how the new famed Insolence lingerie looked on moi, so I TP'd on over and purchased the "Salome" set in black, ooh, sexay! Especially with my new Analog Dog Pom Curl in Copper hair, which is an extremely full, extremely lush, absolute mane of sex kitten hair that moves so beautifully. 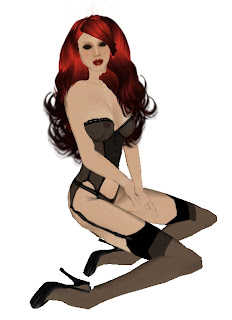 The stockings have back seams and the set is just as lovely from the rear and so is the hair.

The lingerie set is name Salome and I just HAD to do a Salome inspired shot with me wearing ETD Patootie (in Mahogany mind you, not the Chestnut Brown Salome favors) 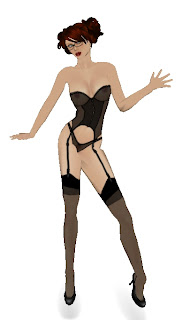 Since I have a Salome Strangelove inspired shot I really ought to have a Sabrina inspired one too. This one is of the Kaiti Designs Cinnamon dress which is quite delectable. It reminds me a bit of the Casa del Shai animal print dresses except Cinnamon is off the shoulder and not strapless.

One of the reasons I like SL so much is because it's like playing with Barbie. I just wanted to post this picture of some of my Barbies. Yes, I have collected them, though not lately as I have mentioned before. 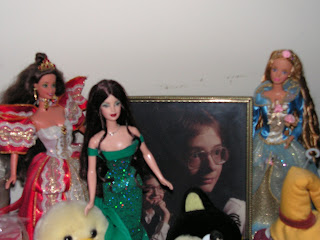 That's a Happy Holidays Barbie, it was my first, a Birthstone Barbie (may emerald), and Barbie as Sleeping Beauty. And yes that is me in the in the photo in the frame, that's my high school graduation picture from 1985.

Roslin Petion and CJ Carnot of Tete a Pied have released a new series of prim nails today, these are longer, "glamour" nails inspired by Burlesque Queen Dita Von Teese. These are the "Scarlet" ones. Pretty! Shiny! Glamour They're available at the Tete a Pied boutique in the Nouveau sim. 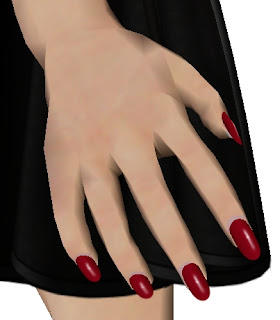 And thanks to these nails, my inventory has hit 10000 items, which is a badge of honor among fashionistas.

Posted by CronoCloud at 2:11 AM No comments:

Face of L'Oreal in SL contest

L'Oreal is holding a contest to determine their 2007 face in SL. As described in detail here on Second Style and on the Aspire blog

Here's the gist of it:

Contestants will compete in a beauty pageant March 31, 2007 at NOON SL on ASpiRE! grounds. Contestants will work the L'Oreal Paris runway in 3 looks, classy casual, formal, and bikini in a glamorous theme. After contestants have modeled their 3 looks they will each come back onto the runway to talk about who they are as people, what they contribute to the SL community and why they should be the avvie to represent L'Oreal Paris!

The grand prize winner of the SL face of L'Oreal Paris 2007 will win a FREE year supply of L'Oreal cosmetics as well as have their avvie displayed to the world at http://www.vip.lorealparis.fr. ASpiRE! Modeling Agency will also award the winner with a coveted employment position as an ASpiRE! Model.


Here are the pictures I sent in, the low res versions. The original bmp's were 77MB, converting them to .jpg put them at around 2MB. 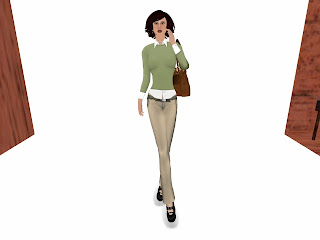 A pretty face shot, in all pics skin is from Tete a Pied, the hair is the Roslin style from ETD. Pearls from Raven's creations, and of course Lynnix Muse prim eyelashes 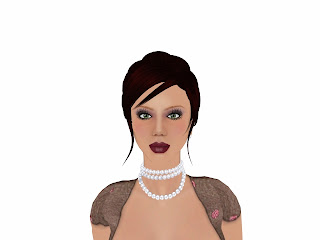 In a black swing dress from 1-800-Bettie, suede court shoes from Yuka Itamae 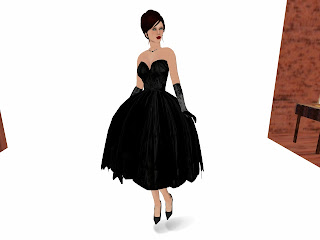 A Glamour Bikini shot in a bikini from Poppy Designs.Endless Summer Collection 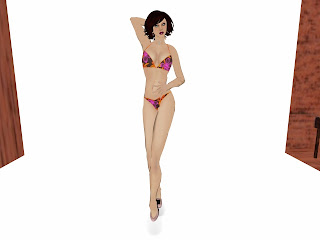 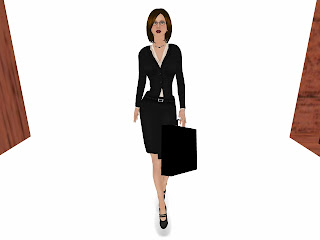 A simply pretty dress from Shine, shoes from Shiny Things. 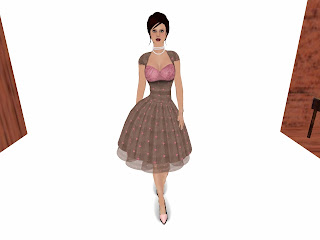 Posted by CronoCloud at 4:45 AM No comments:

I have met the most important fashionista in SL: Swirly Cyclone!

So I've been checking the Paper Couture store in Tableau to see if they new releases were up, so I popped into Tableau and saw lots of green dots at PC.

my scanner showed me several fashionistas were around there, so I flew over and went upstairs and saw the fashionistas and the new spring items. Those Crazy Lu Bitches had released them without a formal announcement. Roslin Petion was shopping and had on the new Tuli pantsuit.

So I bought want I wanted after I hemmed and hawed for a while.(Crazy Lu Bitches want me in the poorhouse) While there I saw a male av looking for a gift for someone and since he had payment info on file I told him to go marry Swirly Cyclone. Really, I did. Then I left to do my thing. Some time later, I then realized that without a formal announcement that many fans might not know about the releases so I opened up an IM window with the PC fan group and announced it. I then popped over to PC in Tableau and waited for the lemming run just to chat with the other fashionistas.

And SHE showed up! Swirly! with Stephanie Misfit! and shortly later, Ayami Reisman!

Now I was just tickled pink to see Swirly because I'm a big fan of the Fashion Victim blog. I heart Swirly!

I had to take a picture: 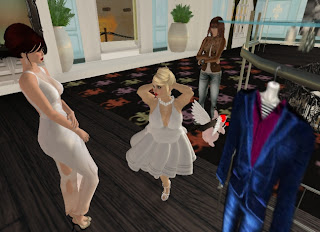 Isn't Swirly beautiful. That's the PC Gouet gown I'm wearing. Later on, Swirly bought one of the PC gowns (the one with the big shoulder puffs and the orange ribbon) and looked awesome in it.

Anyway, it just made my day to meet the Fashion Victim folks, especially Swirly. My SL kind of froze up but while it lasted the conversation was fab-u-lous. I told Swirly about the guy I told to marry her and she was pleased. Just before I locked up she friended me, but I wasn't able to hit the button to accept! Me, a friend of Swirly!

I also saw Fashionista academic Anya Ixchel (who was a brunette) and today, Six Kennedy at PC, loved the blonde on the hair Six was wearing. Six bought the gold/bronze gown with the ruffles which complimented her tanned skin and blonde hair quite well.

Anyway, I just had so much fun talking and hanging out, I always like chatting with other fashionistas.
Posted by CronoCloud at 4:31 PM 1 comment: