A very nice person, upon discovering that I didn't have a spot in SL of my own and went to a sandbox to do my pics gave me build rights over a 512 in their sim. I could build whatever as long as it was up in the sky. Now I've not built much. I've played with the tools a bit but not seriously so I was kind of at a loss. So I went to a sandbox and built myself a skybox. And then I aksed a neibhor how they built theirs and they told me that they just used a hollow 10x10x10 box prim. I tried that out but it seemed a little bit cramped, though I could fit in my Picture Perfect studio in it. It wouldn't be big enough if I wanted to invite friends up to chat/party/dance on cows.


So I went back to the sandbox and tried building a larger skybox. Now even I am aware of the 10m size limit for prims. So what I did was try to build a 12x12 "flat" that I could use to build a larger structure. Doing the 12x12 took 4 prims, I then used that to build a 24x12x12 skybox. much more space than the 10x10 288 vs 100 square meters. But it was 32 prims just for the skybox which isn't bad, I've seen 512 "First Land" houses for sale that eat more prims, but it's still a little too much more than I wanted to use. So I went back to the sandbox and figured out how to build a 30x10x10 with only 5 prims. Much better.

Back when I was a newbie, when the Tete a Pied Une series skins was for sale, one way you could purchase them was by buying a four=pack which then came with a special scripted makeup box, which let you purchase the other skins or new skins in your skin shade at a heavily discounted price.

Tete a Pied blog post about the makeup box

Now when I got the makeup box, I told Roslin and CJ that I thought the box was just so darned cool and pretty that if I ever had a place of my own that I'd set it out on display, which I did. 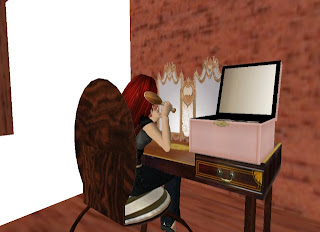 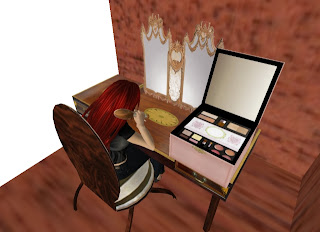 But it's still rather bland, and has no ceiling or security. I've been looking around at houses and whatnot, but not finding much that will suit my purposes. I want a more open floor plan so I can set up my Picture Perfect and I don't want to have to pay alot and I want it to be low prim and aesthetically pleasing. Ingrid Ingersoll has some nice houses but there' more prims than I want to use. Barnesworth Anubis's store is shut down at the moment, so I couldn't look there. I went to a place that supposedly had a nice starter home with a build in security and feature device but the home mentioned in the review was not available as far as I could tell.

Sabrina Doolittle of Chez Petite fame has some nice prefabs on her sim, Calla, in fact the Sky House prefab is very close to what I'm looking for (It's only 27 prims too) except I think it's a touch smaller area wise than my skybox. I want the maximum amount of space I can get for the lowest amount of prims I can get. So if anyone has some thoughts, suggestions, ideas, I'll take them since I'm so out of my element in the house hunting/furnishing/building thing. I think the plot I can build over is a standard 512 32x16

It's been a while hasn't it?

As far as I can tell PXP has gone to the great blogroll in the sky, and I'm sorry that has happened. I lurved PXP and the people who wrote for it. I just wish I could have been more prolific.

So what am I up to now that PXP is gone? Not much really. Wandering around the grid, shopping, lamenting bugs and grid seizures. That sort of thing. I was asked to join the Linden Lifestyles team to help out with the Friday interviews. That's a nice gig and I'm a big fan of Flame haired Sabrina and Patootie headed Salome I still haven't met Salome on the grid yet.

I'll be posting on ocassion to this blog, pretty things I like and whatnot, commentary. I like commentary, I liked that best on PXP.

Six Kennedy has been updating her build again, to improve the customer experience. I expected that to happen, Six is constantly improving stuff. She pays attention and learns. Although I don't own much Six hair, being Elika's bitch, Six does do my favorite "young and sexy teen queen" hairstyle, Poptart Finale.


Oh, Tami McCoy, I've not mentioned her much but she does good hair, especially the shorter styles.

As mentioned I'm Elika's bitch, and I've recently picked up Janae (a pretty updo), Roslin (a Roslin Petion inspired updo which I had to have, being Roslin's bitch) and Bonita II. In the new Mark (Avon makeup sub-brand) there's a model with a hairstyle which looks amazingly like Bonita. I'll have to scan it.

I've been meaning to visit Calla hair again. There's nice hair there that suits my style. I get confused with the name thinking that Calla hair should be in the Calla sim.


I've been wearing Miriel Enfield jewelry lately. In fact I think most of my jewelry is from Miriel. It's that whole pretty thing. I'm a sucker for pretty and retro.

I've got some stuff I'll be blogging here eventually that didn't get blogged on PXP.

I'm sorry I haven't updated since Dec, I just spent most of my bloggy time with PXP.
Posted by CronoCloud at 2:37 AM 2 comments: