Twas the Baron and Baronin's Anniversary, which means...party!  A japanese themed party.  Being the Steamlands, you just know that everyone is going to dress VERY well (which everyone commented on, even though I expect it): 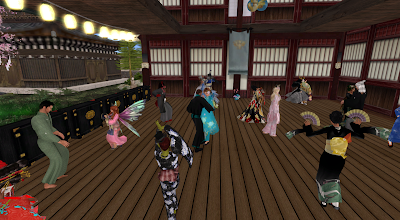 That's the only group picture I took, I crashed a couple of times and textures sometimes went blurry on me.  (stupid 3.7.28 compatibility client, the 3.8.X+ series crashes on start on 64 bit Linuxes)

Wasn't going to miss this.  I decided to go Jager and I'm glad I did, because I was the only Jager there!  And what's a Wulfenbach party without a Jager?  Even bought a new skin with Maitreya appliers (Lumae Orsimer Adore from the We Heart Roleplay event) just for the party!  It even came with EARS.  It's going to be a good skin when I do a Zelena (from once upon a time) look.  I just bought the PERFECT outfit for that.

To my right is in the black/gold is Dean "Double Secret Probation" Phrynne of Caledon Oxbridge.  The couple with the fellow with the white hair dancing with the pretty lady are the Baron and Baronin themselves.  The Gorgeous blonde in Pink is the Lady Skye.  Who quite frankly makes me look like chopped liver fashion wise most of the time.  SHE is the one who should be fashion blogging.  The Eldemars are there in back next to the Tiny Eladrienne Laval.  In blue in front of me is Mari Moonbeam.  Wulfi and Lady Sumoku are in the far right corner, they were the party organizers and hostesses.  The build was VERY nice and several people wanted to steal it.

At the end of the party I just had to take a pic of Babbage Urchins Stormy Stillwater and Satu Moreau, where were freaking adorable.  I just wanted to take them home and give them wuv. Say it with me now....Awwwwwww. 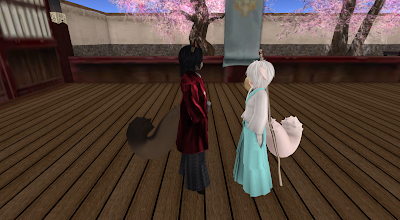