Just Say No to Gacha, and few more gripes from CC McCrankyPants

Just Say No to Gacha! 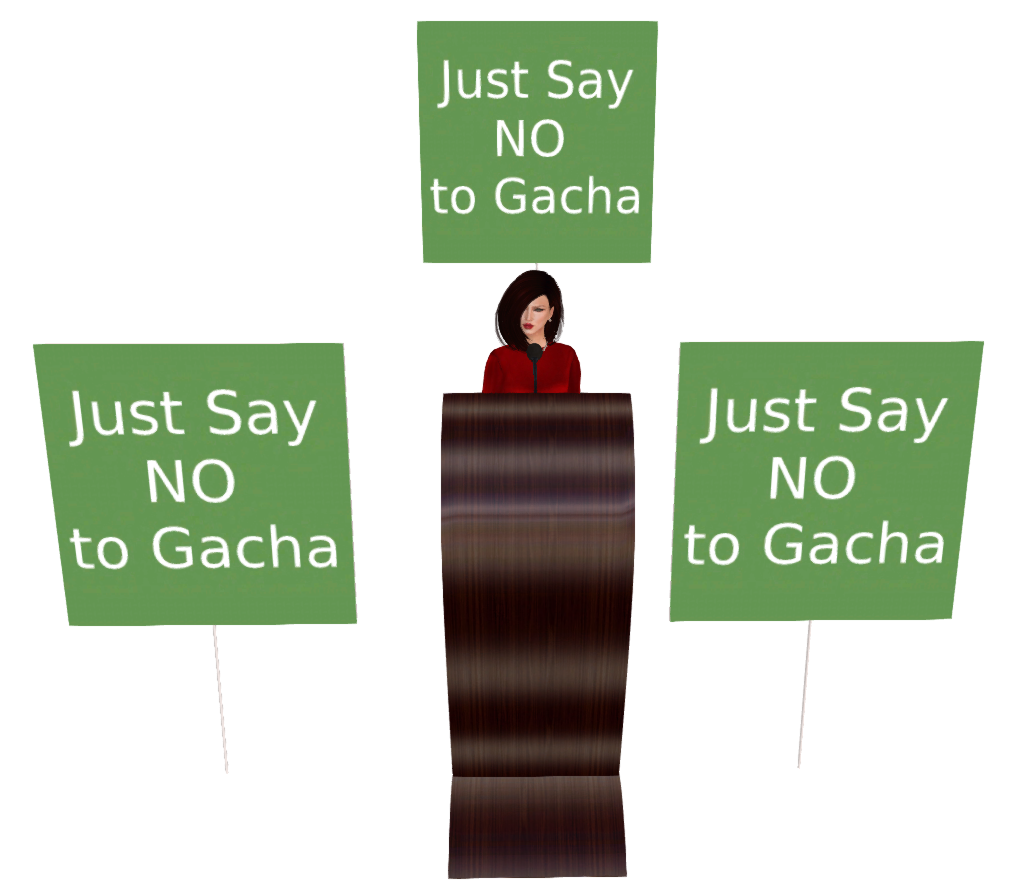 Because while it was originally created as a fun inexpensive thing based on Japanese toy/collectable-in-a-capsule vending machines, it's turned into just another customer un-friendly marketing tool that is akin to gambling.

And this isn't the only issue.  There's another of Gacha only items.  Meaning if you don't go there, you can't get it at all, not even if you wait.  I consider that, downright contemptible.  Sure I can accept some waiting period, but I want to be able to buy the gacha item in the store without having to put up with gacha to get it.  I'm willing to pay a fair price for it.

And don't get me started on every designer and their pet KittyCat starting up their own C88 style clique and doing their own monthly location based event.  Sometimes with the evil that is event only items, which the organizers tell the designers to use to get people to come to the events rather than just shopping at the stores.

And Hunts!  I'm one of those people who think Designers that participate in hunts should put the hunt item in the front of the store in a box  you can buy...just as an option for those who just want to get in, pay a little something for it, get the item and get out.

Look...Designers you have got to stop doing this.  These events don't really help you or the consumers, they just fill the pockets of the organizers.  I know they're one of the forms of marketing that work in SL, but you need to figure out something better.

Notes on the Outfit:

I wanted an Adolfo-ish Nancy Reagan-esque outfit, so I settled on the Steffen Garcia: Blair. The skirt is shorter than Nancy or most Political Wives would wear, but otherwise it has that whole "lady who lunches/Political Wife Sex Kitten thing going on.  It looks classic, but it also has sex appeal.

The skirt's rigged a bit too slim so it looks funny when you walk, the alpha and skirt rigging need some tweaks. Hopefully the designer will do an updated version.  It comes in several colors.

Hair is Truth Colbie, which is my go-to hair for that tailored elegance/anchorwoman bob look. Skin is my usual Belleza, Jewellery is the Michelle Pearl set from Yummy. (Which makes perfect sense with the outfit). Shoes are the Hucci Glynco's.

Posted by CronoCloud at 2:58 PM